This is a picture taken near White Sands National Monument. Unfortunately, I have precious few pictures there since I was so deathly afraid of taking my SLR out into the dunes. As it was, I had to blow dust out of the sensor when I got back. Everything is very dry out here and very sparse. The trip between Abilene and El Paso was simply amazing. Miles and miles of nothing. No towns, no people...nothing except desert, shrub and mountains. 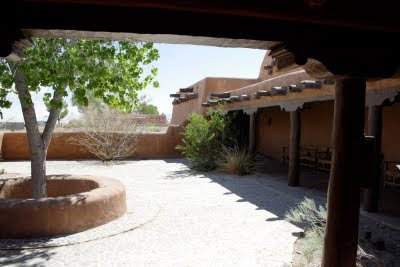 I will be going on a two-week vacation with my family beginning May 16. I will have limited access to the internet during that time so I may not be able to post at all since any internet time I do have will be used re-editing the latest BioLogos post I just turned in. I will commence posting here when I get back.
Posted by Jimpithecus at 5/15/2011 10:39:00 PM No comments:

That is a bit of a dramatic headline but the story is exactly that. The winner this year is Martin Rees, the Astronomer Royal in Great Britain. Steve Connor, of the Independent, writes:

Martin Rees, the former president of the Royal Society and master of Trinity College, Cambridge, was given the award for "exceptional contributions to affirming life's spiritual dimension" through his research and writings on cosmology. Lord Rees of Ludlow, who has said he holds no religious beliefs, defended the prize on the grounds it was awarded by a foundation which has given money to fund important science projects at respectable research institutions, including Cambridge.

This did not sit well several members of the scientific establishment:

Jerry Coyne, an evolutionary biologist at the University of Chicago, said the Templeton Foundation is "sneakier than the creationists" by introducing the idea of faith into a discipline where faith is anathema. "Religion is based on dogma and belief, whereas science is based on doubt and questioning. In religion, faith is a virtue. In science, faith is a vice," he said.

Oddly, Coyne is correct here. Science, especially evolution, is demonized by many as being dogmatic and religious, yet Coyne is presenting it exactly as it is, a scientific discipline that proceeds along scientific principles. In other writings, it is clear that Coyne thinks that religion in general is a vice but that is not his point here.

Now it looks like there is evidence that the hyper-robust Australopithecus boisei did not survive on a diet of nuts and berries, as has been thought for decades. New research by Thure Cerling suggests that their primary subsistence was on grass, instead. On the other hand, the LiveScience article by Jeanna Bryner notes:

The finding — the big guy's teeth showed only light wear — might force scientists to downgrade everything they thought they knew about hominids' diets. For starters, the findings could cause this hominid, Paranthropus boisei [or Australopithecus boisei], to relinquish rights to its long-held moniker, the Nutcracker Man, in the eyes of anthropologists.

The Nutcracker Man lived from about 2.3 million years ago to 1.2 million years ago, before vanishing from the fossil record. He boasted a huge jaw with massive chewing muscles and flat, tough teeth whose crushing power could obliterate the roots and nuts of his home on the African savanna.

This is in stark contrast to the recent article by Cerling et al., which states very clearly:

Carbon isotope studies of P. robustus from South Africa indicated that it consumed some plants using C4 photosynthesis such as tropical grasses or sedges, but were also consistent with most of its dietary carbon (approximately 70%) having been derived from the C3 food items favored by extant chimpanzees (Pan troglodytes) such as tree fruits. In contrast, stable isotopes measurements of two P. boisei specimens from Tanzania suggested a high component of C4 biomass in its diet...1

In this case, C4 biomass is grasses and sedges. The PLoS article advocating the fruit position by Ungar et al. has this to say:

While the craniodental functional morphology Paranthropus boisei suggests an ability to generate and dissipate forces associated with the consumption of extremely hard or tough foods, microwear texture analysis offers no evidence that these hominins regularly did so.2

They list as a possibility that boisei ate fruit and suggest that it may have practiced a diet like the modern gorilla.

At this point, the only thing the two papers seem to have in common is that A. boisei ate softer foods than A. robustus. It will still have to necessitate a subsistence model change for this hominin.

New Jersey.com is asking the question Should N.J. Public Schools be allowed to teach creationism? I just voted no. So far, 69% of the respondents agree with me but that is only 217 people so far. The story has this to say:

Creationism: The doctrine that matter and all things were created, substantially as they now exist, by an omnipotent Creator, and not gradually evolved or developed.

That's the textbook definition, and the way Gov. Chris Christie was speaking at a town hall meeting last week, school districts would be free to teach it.

It seems Christie knew he was about to put his foot in his mouth, then did it anyway.

“I probably have little business getting myself involved in these kinds of questions,” Christie said, adding that local school boards “should be making those decisions about what curriculum is being taught in your schools.”

I think that I would quibble with the definition, since what they really mean is young-earth creationism. After all, I am a creationist as well; just an evolutionary creationist. The problem is that the YEC crowd is so vocal that, in the eyes of the media, that is creationism.

I doubt that Christie, who is tied up right now in facing off with the unions and trying to save the state’s economy, is thinking much about creationism. As such, he might be receptive to suggestions to allow such teaching. One never knows. He ain't sayin'.
Posted by Jimpithecus at 5/13/2011 09:16:00 PM 2 comments:

Answers in Genesis Responds to Criticisms of the Ark Encounter

Answers in Genesis received a blistering email from a reader who complained that the Ark Encounter was a waste of money. Since AiG doesn't allow comments to their posts, this must have been written directly to the organization. It reads in part:

In an over inflated egotistical effort to try and prove themselves right and waste money this has to be the tops! Two $10,000,000 projects to build housing with education, community services and ministry support and call them Ark (ACTS of Real Kindness is a much better idea!

The battle for mankinds mind isn't lost but without the heart there is no hope and without God and Jesus there is no love, faith or hope and you have put the 7 day creation as your God.

He is absolutely correct about that last part as we have seen from numerous posts from both the ICR and AiG. They have responded to this email on their site thus:

Perhaps we haven’t communicated well enough the nature of the Ark Encounter project and why we think it will be even more impactful [Ed: Is that a word?] for Christ in our culture than our evangelistic Creation Museum. People mock our museum, but God has blessed it beyond our expectations.

Frankly, we believe the Ark will be an extremely powerful evangelistic tool. It provides a picture of salvation, and thus allows us a great opportunity to proclaim salvation through the ultimate Ark of salvation: Jesus Christ. While the Flood was a judgment by God upon the rebellious people of the day, a gracious God provided a means of salvation for Noah and his family. What could possibly be more important in this world than evangelism? I’d like to hear your opinion.

Correct me if I am wrong but isn't an evangelistic tool the same thing as a ministry? In the interview with Anderson Cooper, Ken Ham, when asked if the Ark Encounter was a “ministry” specifically stated that the Ark Encounter was a “profit organization set up to give a particular view of biblical history centered around Noah's Ark.” This makes it sound like just another historical museum, no different than the Natural History Museum in Washington, D.C., which is set up to give a view of natural history centered around mainstream science. In fact, Ham uses the phrase “profit organization” three times in the space of two minutes and never focuses on the religious aspects of the park. Why, if the purpose of the park is evangelism, would Ken Ham want to hide that? Here's why.

As Jeff Toobin points out “The Government can't sponsor something if the primary purpose is to advance religion.” Therefore, Ken Ham cannot be open about the park because if he is, then he draws unwarranted attention to the true nature of the park (evangelism), which might lead to it losing the subsidies. How's that for subterfuge?

The other thing that strikes me about this is something that I mentioned in the last post: that Ken Ham makes a point of stating that AiG is only a small part of the whole endeavor, just one partner of many, in an effort to de-emphasize the religious aspects of it and to appear to distance themselves from the project. Yet, Mark Looey, the writer of the email response states:

Some people have wondered why we have mentioned the possible numbers of people who might be coming to the Ark (1.6 million in the first year). First, it’s because we are excited to have the opportunity to share the gospel. As we design the Ark Encounter, we are keeping in mind that perhaps half the visitors will not be regular churchgoers.

Not “As the Ark Encounter is designed,” or “As they design the Ark Encounter,” as you would expect if AiG is only one small partner, but “As we design...” It is clear that Answers in Genesis is taking not just a subsidiary role but a major role in the whole untertaking, something that Ken Ham isn't willing to admit on television. Yet more subterfuge.

Is Answers in Genesis going to be above board about any of this?