Richard Dawkins is interviewed and admits that he cannot be sure that God doesn't exist.

He argues that on a scale of 1 that God exists to a 7 that God doesn't exist, he is a 6. It is short clip but informative.

Oklahoma can now lay claim to having joined the group of states to have an “academic freedom” bill pushed into the house of representatives. UPI writes:

State Rep. Sally Kern, an Oklahoma City Republican and author of the bill, defends it as a guarantee of academic freedom, The Oklahoman reported. The House Common Education Committee, which voted 9-7 a year ago to keep the bill off the floor, released it by a 9-7 vote Tuesday.But Victor Hutchinson, professor emeritus of zoology at the University of Oklahoma and head of Oklahomans for Excellence in Science Education, said the bill uses language put together by the Discovery Institute. The institute, headquartered in Seattle, is an advocate for intelligent design theory.

Once again, a well-meaning republican puts forth a bill because they think it is the “right thing to do” without having the slightest understanding of the bill's consequences. I Hope that it is voted down.
Posted by Jimpithecus at 2/24/2012 09:15:00 PM No comments:

There is a lengthy post in the Telegraph written by Chris Stringer, one of the architects of the modern human origins debate, on the enigma that is Homo floresiensis, the so-called “hobbits” (a name that every biological anthropologist detests, by the way). He writes:

So who were these Hobbits, and where did they come from? At first, it was assumed that they were castaways, descendants of Homo erectus who had somehow got to Flores, perhaps by boat. Due to the limited resources available on their new island home, the species then started to shrink (a process known as island dwarfing).

The latest studies of the Hobbit bones, however, have led to the radical idea that these tiny people were in fact descended from something even more primitive than Homo erectus – yet another species, whose ancestors emerged from Africa two million years ago or more, and then evolved in isolation in south-east Asia, finally disappearing only within the last 20 millennia.

Truth be told, the discovery at Liang Bua caught everyone with their pants down. We really have no idea how these hominins could have survived in this way for this long without interacting with other populations that came and went, both Homo erectus and Homo sapiens. It is going to be a long time before we understand just what went on there.

New Book on the Dover Trial

Research and Markets is hawking a new book by Gordy Slack on the Dover trial that pitted ID against some agitated parents and wound up being a complete takedown of ID as a legitimate theory to be taught in science class. From their website:

Journalist Gordy Slack offers a riveting, personal, and often amusing first-hand account that details six weeks of some of the most widely ranging, fascinating, and just plain surreal testimony in U.S. legal history—a battle between hard science and religious conservatives wishing to promote a new version of creationism in schools.

Should be a fascinating read. I will stick it behind the other thirty books that I need to read.

Email ThisBlogThis!Share to TwitterShare to FacebookShare to Pinterest
Labels: Dover, Intelligent Design, Of Pandas and People

Sorry about the light posting...

I am rewriting an anthropology class almost from scratch and it is taking a lot of time. Plus, I owe Darrel Falk at BioLogos a rewrite...

Language Origin Not in Africa?

Science Daily is reporting a story that follows up on a story from last year in which it was posited that Africa was the birthplace of language. They write:

In the beginning was the word -- yes, but where exactly? Last year, Quentin Atkinson, a cultural anthropologist at Auckland University in New Zealand, proposed that the cradle of language could be localized in the southwest of Africa. The report, which appeared in Science, was seized upon by the media and caused something of a sensation. Now however, LMU linguist Michael Cysouw has published a commentary in Science which argues that this neat “Out-of-Africa” hypothesis for the origin of language is not adequately supported by the data presented. The search for the site of origin of language remains very much alive.

Cysouw argues that the methods that Atkinson used, borrowed from population genetics, are not directly applicable to linguistics research. He argues that language origins can only be traced back around 1o,ooo years.

It has been pointed out to me that the T-shirt design “Science: Ruining Everything Since 1543” might be reasonably interpreted as poking fun at belief in God. How I saw it was looking for scientific proof of God's existence or explaining everything supernaturally, as people did before the scientific method arrived on the scene. I certainly did not mean the first interpretation.
Posted by Jimpithecus at 2/15/2012 01:19:00 PM No comments:

Science Insider is reporting that the entire genetic sequence of the Denisova Cave individual has been completed and posted on the web site at the Max Planck Institute for Evolutionary Anthropology. Ann Gibbons writes:

A year ago, researchers published the first rough draft of the genome of an archaic girl who lived in Denisova Cave, Siberia, at least 30,000 years ago. In January, Max Planck paleogeneticist Svante Pääbo was at a meeting in Sweden when he realized that researchers in other labs were poring over year-old sequence data that was far less complete than what his colleagues had obtained in the lab in the past year using sensitive, new methods to sequence ancient DNA. "I felt bad knowing that we had this very much better version of the same genome and that it would be a few months before it became available," says Pääbo.

I am curious to see what sorts of ERVs are present and if any are derived from the Neandertal condition. A wealth of studies are just waiting to be done.

The Evil of Science

A friend of mine went to a meeting at another part of the lab and saw someone wearing this shirt. 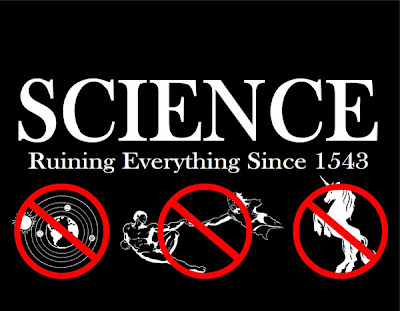 The link to order one of your own is http://smbc.myshopify.com/collections/frontpage/products/science-shirt.

Indiana: They Did It Anyway...

WANE-TV in Indiana is reporting that, with a vote of 28-22, the Indiana Senate passed a law to teach creationism in the Indiana public schools. They write:

The bill permits local school boards to offer classes that include origin theories from religions including Christianity, Judaism, Islam, Hinduism, Buddhism and Scientology.

Democratic Sen. Tim Skinner of Terre Haute, a former high school teacher, said he believed few teachers would be qualified to teach a class covering multiple religions and worried about the lack of specifics on what such a class would include.

"I think you are just asking schools --and I think you're asking teachers -- to do something that is going to open up a door that is probably going to result in a lawsuit which is going to be costly," Skinner said.

Ya think? Have none of these senators heard of Dover, Pennsylvania, or the countless court cases that came before it? The first lawsuit, and there will be one, will be very costly and stupid. the story also notes:

Republican Sen. Dennis Kruse of Auburn, the bill's sponsor, said the U.S. Supreme Court hasn't ruled on the teaching of creationism since the 1980s and that the court could rule differently today.

The problem is that in the Dover case, the prosecution was successful in linking the ID policies of the school board to the underlying creationism principles, right down to “cdesign proponentsists.” This one ought to be fun to watch.

The Houston Chronicle has given Texas an assessment for science education and it was not good. Gary Scharrer writes:

Texas public school science courses "pay lip service" to critical content and largely ignore evolution in the middle grades, according to a national education foundation study that gives the state of Texas an overall "C" for science education.

The average grade for Texas science curriculum standards by the Thomas B. Fordham Institute in a national report card Tuesday represents a step up from the "F" issued for Texas two years ago by the National Center for Science Education.

Don McLeroy, the former head of the the Texas school board before he was ridden out of town on rails, was true to form:

McLeroy said he was pleased the report described the high school evolution teaching as "exemplary."

"The report confirms what I have always insisted: that the creationists inserted real scientific rigor into the teaching of evolution," McLeroy said.

It was this “scientific rigor” that got them an “F” in the first place. Note that he has nothing to say about all of the other scientific disciplines that were addressed. He doesn't care about them. As Mike Warnke would say:“He could look through a keyhole with both eyes.” Here's to hoping their grade improves in the future.