A story running in Newsweek and the Washington Post (and other outlets, presumably), details research into the newly discovered fossil footprints at Laetoli dated to 3.6 mya that clearly show a modern human gait.


Two sites in Laetoli, Tanzania, feature footprints of human ancestors who lived about 3.6 million years ago. They were members of the genus Australopithecus. That's the genus of “Lucy,” the 3.2 million-year-old human ancestor whose fossilized bones were discovered in Ethiopia in 1974.

David Raichlen, an evolutionary anthropologist at the University of Arizona, has studied the Laetoli footprints and compared them to footprints made by human volunteers in laboratory settings. He examined footprints of individuals walking normally and also those walking with bent knees and bent hips. (Scientists who study locomotion use the acronym BKBH). The Laetoli footprints more closely match modern human footprints.

“Upright, humanlike bipedal walking goes back 4 to 5 million years,” Raichlen told The Washington Post in advance of a symposium on the evolution of human locomotion, which took place Sunday at the Experimental Biology 2018 conference in San Diego.

This dovetails with the recent findings that Ardipithecus, a hominin dated to around 4.4 mya, likely could travel equally well on the ground or in the trees.  Oddly, the WaPo article doesn't mention this.
Posted by Jimpithecus at 4/24/2018 10:18:00 PM No comments:

The Slander of “Darwinism”

Kenneth Miller has written yet another extraordinary essay, this one on the nature of the term “Darwinism” and how it is pejoratively used by those insistent on trashing evolutionary theory.  He writes:


He could have just said he didn’t believe in evolution, or that evolution had flaws. Or, he could have said that a book with a whole unit on evolution was just too much. But William Buckingham, of the Dover Area School Board in Pennsylvania, didn’t use the “E” word when he explained his objections to the biology textbook selected by the science teachers at Dover High School. Instead, he invoked a term that didn’t even appear in that textbook. Prentice Hall’s Biology: The Living Science, he claimed, “was laced with Darwinism from beginning to end.” Surely, he must have thought, “Darwinism” was a disqualifying slander that everyone could understand.

Buckingham, who was singled out for special re-probation by Judge Jones at the end of the trial, was at once ignorant and pejorative.  He was ignorant in that Darwin was not the only one to develop the idea of natural selection, Alfred Russel Wallace being the other one. He meant to be pejorative (in the same way that all of the Discovery Institute writers intend) because he knew that the term “Darwinism” carries with it the baggage of animus and atheism.As Miller notes, when an entire branch of science is referred to by its founder's name, then it takes on the air of an ideology, rather than a legitimate field of study.  The ideology can then be characterized as agenda-driven, attempting to tear out the heart of morality and decency.  None of this, of course, is true but the perception is rampant.  Miller also points out something of which I hadn't thought:


The overuse of Darwin’s own name facilitates another line of attack, by pretending that the field relies entirely on Darwin’s own work, fashioned in an age before the modern sciences of genetics, biochemistry and molecular biology emerged to confirm and expand his ideas. This allows the pretense that evolution is a stolid, unchanging field, with few new ideas that might refresh its 19th century heritage. Any scientist would scoff at this, of course, knowing the vigor that new discoveries constantly infuse into evolutionary biology. But to laypeople, unfamiliar with the rapid pace of scientific discovery, this can be a persuasive argument.

This would be no different from referring to modern physics as “Newtonism”  despite the vast advances that have been made since Newton's time.  Miller laments that these perceptions are hard to fight against because they appeal to emotions rather than empirical thought. Further, there are those of the atheist perspective who argue that, as humans, we are no better or special than any other species on the planet.   For this, though, he has an answer:


We are the children of evolution in every sense, part of Darwin’s fabled “tangled bank.” We must never forget that. But we must also remember that we are the only creatures to emerge from that thicket and make sense of it all. “Darwinism” does not diminish us. Rather, it puts the human experiment into a truly scientific perspective. We are not just hairless bipedal primates. We are creatures capable of the fugues of Bach, the verses of Yeats, the stories of Twain, the creations of Dalí and, for that matter, the mathematics of Gödel, Ramanujan and Turing.

In contemplating the lessons of evolution for our species and our culture, this is how we should overcome the mindless use of “Darwinism” as a slur. Some may feel demeaned by our evolutionary heritage, but I would argue that the more appropriate emotions are joy and delight. Joy that we are approaching a genuine understanding of the world in which we live, and delight at being the very first stirrings of true consciousness in the vastness of the cosmos. Far from diminishing us, knowing the details of Adam’s journey ennobles each of us as a carrier of something truly precious—the genetic, biological, and cultural heritage of life itself. Evolution describes not the death of Adam, but his triumph. That is the great truth of our story.

Hemant Mehta writes for Patheos that Kent Hovind is back in the news.  You kind of have to read through the vitriol a bit:

In 2009, the IRS took control of Dinosaur Adventure Land, Kent Hovind‘s Creationist theme park in Pensacola, Florida, so that they could sell it off and recover the money Hovind owed for committing tax fraud. (It was a sad day for, like, three people.) Hovind was sentenced to 10 years in prison and was eventually released in 2015.

While there were attempts by Hovind’s son to buy back the property, that never worked out and the park has officially been closed since 2009.

You know what that means.

Hoving [sic] has built another Dinosaur Adventure Land! This one is in Repton, Alabama, and the grand opening takes place this Saturday.

That is not really what got Mehta's attention, however. It was this: 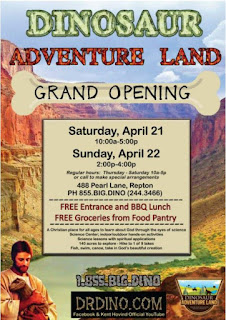 In the bottom left hand corner  is an image of Jesus holding a velociraptor as if it were a cute, cuddly kitten.  In the video, he speaks of evolution as being dumb and evil and “if you fell for that lie, we are here to show you the truth.”  The accompanying video is difficult to watch, as it largely contains Hovind's peculiar interpretation of  the book of Revelation, which is even murky to scholars who have been studying it for centuries.  That doesn't stop Hovind.

I was never sympathetic to the case that got him thrown in gaol for a few years, but it is clearly evident that prison has not dulled his enthusiasm or oddness.
Posted by Jimpithecus at 4/19/2018 10:37:00 PM No comments:

Ardipithecus May Not Have Been Entirely a Facultative Biped After All

In a new article in the Proceedings of the National Academy of Sciences, several researchers have concluded, using 3D morphometric analysis have discovered that Ardipithecus ramidus, while still having facultative (didn't have to but could) bipedalism, when it did walk, its bipedal gait was nearly human.  From the abstract:

This positions Ardipithecus as the classic intermediate in terms of bipedal locomotion.Although there are many traits in Australopithecus afarensis that are still transitional in terms of the rib cage, dentition and aspects of the hip, it is clear that the major adaptations for bipedalism were in place nearly a million years earlier.  This also suggests that it is not out of the realm of possibility that the fossil footprints in Crete really do reflect a bipedal hominin.  At the risk of positing heresy, the fact remains that we really don't know exactly where hominins first appeared.  This study also reinforced the distinct separation between apes and humans in terms of iliac shape, and that this split must have taken place even further back in time that we have supposed.

The Independent has a news story on this here.  One of the authors, Herman Pontzer remarks:


“It kicks us out of this old paradigm of thinking about human evolution,”...“In that old picture that is everywhere where you have the evolution of man going from crouching thing to upright thing to a human – as much as we have known that is not right, I still think people have it in their heads.”

A new fossil finger has been unearthed as Arabia that purports to be 87 ky old.  UPI is on it.

Around the time humans showed up, a climatic shift brought monsoons to the region, spawning grasslands. Animal fossils suggest antelope grazed the land and hippos swam in the ancient lake.

Researchers measured ratios of radioactive elements in the finger bone and compared the ratios to those found in animal fossils with confirmed dates. The analysis confirmed the age of the human fossil, the oldest found in Arabia.

"This discovery for the first time conclusively shows that early members of our species colonized an expansive region of southwest Asia and were not just restricted to the Levant," Huw Groucutt, a researcher with the University of Oxford and the Max Planck Institute for the Science of Human History, said in a news release.

How do we know it was from Homo sapiens?


Among these finds was a well preserved and small fossil, just 3.2 cm long, which was immediately recognized as a human finger bone. The bone was scanned in three dimensions and its shape compared to various other finger bones, both of recent Homo sapiens individuals and bones from other species of primates and other forms of early humans, such as Neanderthals. The results conclusively showed that the finger bone, the first ancient human fossil found in Arabia, belonged to our own species.

I do not have access to this article as neither the lab nor UT has a subscription to Nature: Ecology & Evolution. Aside: Given our focus on materials science and computing, I kind of get why ORNL does not have a subscription.  UT, not so much.  This journal should be in their wheelhouse.  According to the abstract, the find is securely dated and:


The palaeoenvironmental context of Al Wusta demonstrates that H. sapiens using Middle Palaeolithic stone tools dispersed into Arabia during a phase of increased precipitation driven by orbital forcing, in association with a primarily African fauna.

Maddenly, there is no information in the abstract about the morphology of the find, especially given that Neandertal and early anatomically modern phalanges are remarkably similar. I am sure they were able to differentiate it, but I would sure like to know how.
Posted by Jimpithecus at 4/10/2018 10:26:00 PM 1 comment: