Has Noah's Ark Been Found?

Short answer: no.  But a story in Web Top News would have you believing otherwise.


More than 100 researchers from around the world recently came together as part of a three-day international symposium on Mt Ararat and Noah’s Ark in Agrı in Turkey to see if they can find the ark’s final resting place.

“My purpose is to visit the sites around the mountain to find clues about catastrophic events in the past,” said Professor Raul Esperante from the Seventh-day Adventist Church-sponsored Geoscience Research Institute.

Their website states their mission is to “discover and share an understanding of nature and its relationship with the Biblical revelation of the Creator God”.

In 2010, a group of Chinese and Turkish evangelical explorers set out to explore the region and find the vessel’s remains.

After a few weeks, they claimed to have found wooden specimens from an ark-like structure 4000m up the mountain.

The mountain is the highest peak in Turkey, standing more than 5100 metres tall.

The team claimed they carbon dated the wood, which proved it was 4800 years old, around the time the ark is said to have been afloat.

Some are not convinced:


Nicholas Purcell, a lecturer in ancient history at Oxford University told MailOnline the claims were the “usual nonsense”.

“If floodwaters covered Eurasia 12,000ft [3700m] deep in 2800BC, how did the complex societies of Egypt and Mesopotamia, already many centuries old, keep right on regardless?”

One of the things that is pointed out by conventional geologists (and by young-earth creationist Andrew Snelling, later in the article) is that Mt. Ararat was a volcano and, if all of the vulcanism that is evident in the geological record really did occur during the year-long flood, it is difficult to imagine how the Ark would have been able to land on Mt. Ararat, which would surely have still been scalding hot. There are other problems with the idea that the vulcanism all occurred in one year but this is not the place for that.

It has always intrigued me why explorer after explorer assumes that the ark is specifically on this mountain.  There is no biblical mandate that the ark has to be here.  In fact, it plainly states that the ark came to rest in the "mountains of Urartu," which is an area of some 400,000 square miles, any one of which would have been just as likely.

But all of this sidesteps the other major problem:


Talking after the initial claims in 2010, Mike Pitt, a British archaeologist, said the evangelical explorers had yet to produce compelling evidence.

He said: “If there had been a flood capable of lifting a huge ship 4km up the side of a mountain 4800 years ago, I think there would be substantial geological evidence for this flood around the world. And there isn’t.”

It is not just that there is no evidence for a world-wide flood, there is a mountain of evidence suggesting that something like that could not have happened.

Kastalia Medrano, of Newsweek, has written a post describing the discovery of a fossilized Antarctic Forest.  The piece starts off innocuously enough:


Scientists announced the discovery of the fossilized trees in Antarctica’s Transantarctic Mountains in November. They believe the forest is the oldest one known to exist in the southern polar region, according to Breaking News Israel. They proposed that the ancient trees preserved a record of a large-scale global die-off event, which raised the planet’s temperature to dangerous extremes and turned its oceans acidic, and ultimately wiped out 95 percent of species on Earth. But they were left with the question of what exactly was the catalyst for those changes.

Then comes the sharp turn:


At least one biblical scholar believes he has the answer: The die-off event was the Great Flood described in the Book of Genesis.

“This discovery should be no surprise to those who take Genesis as literal history,” Tim Clarey, a geologist from the Institute for Creation Research, wrote on the ICR website. “The Bible clearly describes a global flood that affected all land masses—why should Antarctica be an exception?”

The problem, of course, is that the Permian extinction is only one of five mass extinction events, and it is not even the first one. It is the third, behind the Ordovician and late Devonian extinctions.The one that took out the dinosaurs was the late Cretaceous extinction.  Furthermore, there are many, many layers of sediment between each extinction event.  So the question: why would this particular extinction event signify the flood?  Why not the most recent one?  Also, isn't it generally thought by young earth creationists that the ENTIRE geologic column represents the flood deposits?  Clarey does not mention this at all in his column.

Part of the interpretation hinges on the discovery of fossil cells, which are explained by an extremely rapid burial, an explanation that Clarey doesn't buy.

Clarey then received a critique from a biblical scholar, Brent Landau, as Medrano writes:


If you’re not persuaded by the secular community, take it from the religious community. Brent Landau, a biblical scholar from the University of Texas at Austin, told Newsweek that Clarey is “espousing a form of religiously motivated pseudoscience, and a relatively unsophisticated one at that.”

Landau explained that Young Earth Creationists arrive at the idea that the planet is only 10,000 years old through methods like adding up the ages of people written about in the Book of Genesis, and that there’s no need for religious scholars to take that kind of evidence more seriously than the “vast amount of scientific data” pointing to the Earth being around 4.6 billion years old.

“Notice that he links the destruction in Antarctica to the Flood, but insists that the scientists’ date for this catastrophe of 280 million years ago must be incorrect,” Landau wrote to Newsweek over email.

As Carol Hill pointed out, there simply isn't any defensible evidence for a world-wide flood. Even if the fossilized trees were entombed very rapidly, there are many other natural formations that show clear signs of slow deposition. You simply cannot extrapolate one localized area to the entire world, yet this what young-earth creationists continually do.
Posted by Jimpithecus at 12/22/2017 10:29:00 PM 3 comments:

If you have been studying human evolution, this story is not new.We have suspected for some time that humans migrated out of Africa in waves, beginning with Homo heidelbergensis, up through archaic Homo sapiens and, now, modern Homo sapiens.  As the story notes, there have likely been multiple migrations of Homo sapiens, as well.

From the story in Science Daily:


A review of recent research on dispersals by early modern humans from Africa to Asia by researchers from the Max Planck Institute for the Science of Human History and the University of Hawai'i at Manoa confirms that the traditional view of a single dispersal of anatomically modern humans out of Africa around 60,000 years ago can no longer be seen as the full story. The analysis, published in the journal Science, reviews the plethora of new discoveries being reported from Asia over the past decade, which were made possible by technological advances and interdisciplinary collaborations, and shows that Homo sapiens reached distant parts of the Asian continent, as well as Near Oceania, much earlier than previously thought. Additionally, evidence that modern humans interbred with other hominins already present in Asia, such as Neanderthals and Denisovans, complicates the evolutionary history of our species.

Here is the graphic from the story: 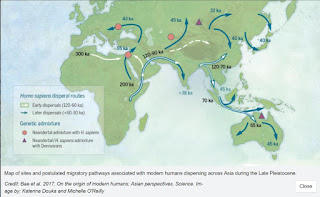 What is only hinted at in the article is that when these waves of moderns came out of Africa, they interbred with the archaic hominins that they encountered. Further, this genome was remarkably stable, since there is genetic evidence that there was at least 500 thousand years of separation between them.Also missing from the story is the range of variation that these hybridizations display.  For example, as noted by the triangle on the map, the Xuchang fossils from China seem to show a mix of modern, Neandertal and late Homo erectus morphologies.  As I noted at the time:


The implications of these skulls are stark: there has been widespread population mixing and regional continuity in Europe and Asia for at least 400 thousand years. Not only did the Neandertals feel enough cultural kinship to mate and have children with these East Asian people, the early modern humans coming out of Africa did, as well.

The other peculiar thing about the graphic is that there seems to be no migration pattern through the strait of Gibraltar. This seems odd since this is likely at least one of the routes that were taken by H. ergaster between 1.5 and 2.0 mya, and since it is thought that the Levallois tool technology comes from the Middle Stone Age of Africa, this would have been a likely route of introduction.  There may have been a barrier of sorts, suggested by the fact that the latest surviving Neandertals are from Spain.
Posted by Jimpithecus at 12/16/2017 02:19:00 PM No comments:

Okay, probably not nearly on the level of the Frog From Hell or the Snake From Hell, but coming into contact with a six-foot penguin would be quite something.  From the NPR Story:
An international team of scientists have announced the discovery of a previously unknown species of prehistoric penguin.

The bird waddled around off the east coast of New Zealand between 55 and 60 million years ago. And it was a giant as far as penguins go. The researchers estimate that it probably weighed about 220 pounds and was around 5 feet 10 inches tall.

"That's about as tall as a medium-sized man," says Gerald Mayr, a paleontologist at the Senckenberg Research Institute and Natural History Museum in Franfurt, Germany, and the lead author of the new study published today in Nature Communications. "This particular specimen is one of the largest known fossil penguins."

The largest living penguin, on the other hand, the Emperor penguin, is a good bit shorter — around 4 feet.

The scientists have named the new species Kumimanu biceae, which means 'monster bird' in the Maori language. (Kumi is the name of a monster in Maori mythology and manu means bird.)

Here is the image from the story: 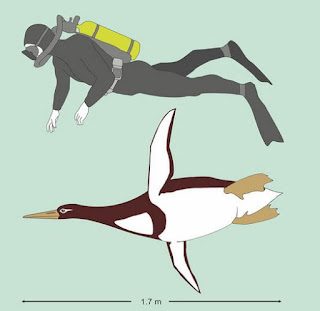