Last year Henry Lee Poe wrote a paper for the American Scientific Affiliation publication Perspectives on Science and Christian Faith called The English Bible and The days of creation: When traditional conflicts with text.  In it, he notes that, while “enormous energy” has been spent on how the Hebrew word yom should be translated, this misses another very important point: the historical addition of the definite article “The” to the opening passages of Genesis. He writes:


In the Hebrew text of Genesis, the days of creation occur sequentially, but not necessarily as consecutive days. January 1 and February 1 come sequentially, but not consecutively because other days intervene between the two days. It is even possible that the fourth day is intentionally placed out of order chronologically. Instead of describing the first act of creation as happening on “the first day,” Genesis states that it happened “one day.” The action does not occur on the first day. It happens one day. A cardinal rather than an ordinal numeral is used.

He uses an example of this to illustrate why this is so important for understanding the creation story in Genesis:

The second part of the article is a fascinating study in how the definite article “The” got into the passages in the first place, showing up in the Wycliffe Bible, in 1394.

Given this, he argues, that the text allows, and even supports vast periods of time for the creation process, in direct contradiction to the young earth view.  It certainly does not support one week of 24-hour days.
Posted by Jimpithecus at 7/31/2015 09:26:00 AM No comments:

Hector Avalos on the Wisdom of Debating Creationists

Hector Avalos, of Iowa State University, has a thoughtful piece called Why Academic Biblical Scholars Must Fight Creationism.  His reasoning is very simple:


...Academic biblical scholars are the best persons to debate creationists. The reason is simple. The Achilles’ Heel of creationism is its biblical illiteracy, and not just its scientific illiteracy.

True enough, scientists have done an excellent job in pointing the scientific flaws in creationism. However, the problem is that scientists usually don’t have enough knowledge of biblical scholarship to address or defeat some of the arguments creationists use to harmonize the Bible with science.

Scientists are not trained to recognize how creationists are distorting biblical texts. Thus, Jerry Coyne’s Faith v. Fact: Why Science and Religion are Incompatible (2015) does an excellent job of explaining scientific theory and methods, but one will not find any discussion of how most creationists are misreading Genesis 1-3.

Creationists in the pews tend to shrug off arguments about DNA, radioactive dating, and other technical subjects because they are not familiar with them. But one need not even go into these scientific intricacies if the Bible does not even say what creationists claim.

Those of us who are educated in a branch of science that bears on this debate tend to think that the science ought to be obvious and scratch our heads in amazement when people reject it.  This is especially compounded by the numerous instances when creationists go out of their way to intentionally distort the science to reflect things it cannot possibly mean.  I found myself in rueful agreement when a leading creationist was described as “horrifically, pathologically dishonest.”

I think because learning curves are the same no matter what sphere of knowledge you examine.  Dr. Avalos comes from a background in theology, and has knowledge in that area that is far greater than your average church goer, who sits down, sings some hymns, and then opens a copy of their favorite bible, where there it is in black and white: God created the world in six days and rested on the seventh.  Why should they believe otherwise?  In order to “get them up to speed,” it would require effectively the same amount of theological education as it would to do the same for the scientific aspects of the argument. To Dr. Avalos, it is patently obvious that people have misinterpreted scripture, just as it is patently obvious to me that they have misinterpreted the scientific evidence.  To the average person, this just isn't so.
Posted by Jimpithecus at 7/28/2015 08:35:00 AM 6 comments:

Scientific American has a story about a new dinosaur discovery in China which shows, among other things, a feathery dinosaur at 125 million years.  As one of the discoverers puts it:


Zhenyuanlong is covered in feathers. Simple hairy filaments coat much of the body, larger veined feathers stick out from the tail, and big quill-pen-feathers line the arms, layered over each other to form a wing. This is a dinosaur that looks just like a bird. If you could see it alive you would probably make no distinction between it and, say, a turkey or a vulture.

Here is a picture of the fossil, accompanying the story. 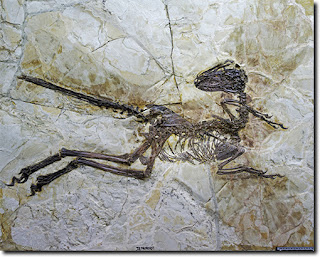 Dr. Jim Stump, a writer for BioLogos and their content manager, has resigned his post at Christian Bethel College, in Mishawaka, Indiana after the college adopted a strict non-evolutionary statement regarding evolution as it pertained to Adam.  Christianity Today tells us:


Dr Jim Stump, an award-winning teacher who has worked at Bethel since 1998 and specialises in philosophy of science, said he had resigned of his own choice because he did not wish to remain under the new creationist policy and bring "tension" to the college.


The new "philosophy of origins" policy was adopted by the college trustees last month and includes the statement: "We believe that the first man, Adam, was created by an immediate act of God and not by a process of evolution." This is an article of the Missionary Church which, until the change in policy, faculty staff did not have to sign up to.

This is similar to the problem that occurred not far from me, at Bryan College, in Dayton, Tennessee, a few months back.

Stump, who is a philosophy professor, evidently felt that he could not continue at the institution and keep his academic integrity.  There was a short mention of BioLogos:


President Deborah Haarsma said in a blog post: "We at BioLogos are disheartened by this decision. It put Jim in the painful situation of having to choose between the scholarship to which he feels called and the academic community to which he has belonged for decades."

She called for Christian colleges to encourage their scholars to engage the scientific evidence that humans evolved, and acknowledge that this can be done without letting go of biblical authority.

As readers of this blog know, I write for BioLogos, in the area of human origins. While I recognize the traditions of the church with regard to Adam, alternative explanations such as those embraced by John Walton, Dennis Venema, Francis Collins and others should be entertained freely within the Christian community. To foist such a policy on all faculty is, as was the case at Bryan, short-sighted and unnecessarily controversial.  Especially given that there is now a mountain of data, both genetic and palaeontological, that supports the evolution of humans.
Posted by Jimpithecus at 7/15/2015 07:33:00 PM 2 comments:

Back from extended vacation.

Controversy has been swirling around physicist Lawrence Krauss, who was quoted as saying that teaching creationism to children is tantamount to child abuse.  Here is what he actually said:


“If you think about that, somehow saying that, well, anything goes, we shouldn’t offend religious beliefs by requiring kids to know – to understand reality; that’s child abuse,” he said. “And if you think about it, teaching kids – or allowing the notion that the earth is 6,000 years old to be promulgated in schools is like teaching kids that the distance across the United States is 17 feet. That’s how big an error it is.”

That was back in 2013. He has now defended that position, again.  Here is what he is saying today:


“Yeah, exactly, but it got some attention,” Krauss replied, “cus if I hadn’t [used that description] you wouldn’t have read the line.”

“In some sense, if you withhold information from your children because you would rather them not know what reality is really like, for fear that it is going to affect their beliefs, then you are doing them harm.”

The interview with Pickering ended with Krauss warning viewers that the universe was often counterintuitive.

“What science has taught us is that things that make sense to us may not be right. The universe doesn’t care what makes sense to you. That’s what’s wonderful. In fact, it causes us to open our eyes and change what we think is sensible.”

I don't think for a minute that teaching children creationism is child abuse, as much as simply misguided for two reasons. First, it does, in fact, teach them a false picture of the universe that is not backed up by any scientific knowledge that we have and, second, it leaves them woefully unprepared scientifically and spiritually for later in life when it is pointed out to them that they have been taught a cardboard version of the universe and of scripture.

More than one person has told me that they felt betrayed when they discovered that there was no support for what they had been taught.  The now-agnostic daughter of one of my friends pointedly told her mother, “I wish you had told me more about evolution.” The example of Glenn Morton should also be kept in mind.

But beyond this, Krauss' comments are irresponsible.  Neil Carter of Patheos points out why:


These are very poor analogies. In each of those parallel scenarios a parent possesses what the child needs (or at least knowingly has access to it) but chooses to withhold it from them for whatever reasons. That isn’t the case with teaching creationism because the parents who do that aren’t really aware that alternative explanations of the origins of the universe are legitimate. Surely Dr. Krauss knows these parents aren’t merely pretending to believe the stuff they’re teaching their kids. They really believe this stuff, as illogical as it sounds...Second, Krauss butchers the word “abuse” by diluting its meaning and applying it to situations which are nowhere near as traumatic or extreme as that word denotes. When a parent beats a child, giving her cuts and bruises, that’s physical abuse. When a parent screams at her child, calling her names and tearing her down psychologically, that’s emotional abuse. When parents withhold material provisions their children need like food, water, or shelter, or they put them in physical danger, that’s child abuse.

This is similar to the arguments made by Richard Dawkins that got him in hot water a few years back. Krauss is fueled by his hatred for creationism and what he does not seem to understand is that the effect  he will have on people who do accept creationism is that they will think him to (rightly) be judgmental and condescending and they will simply dig in their heels. After all, that is how I react when I hear people say that Christianity is a fairy tale believed by idiots.