As Tayyip Erdogan tightens his control over secular Turkey, the most recent casualty is evolutionary science.  The BBC News reports:


On Wednesday, the head of the education ministry's curriculum board Alpaslan Durmuş announced that a section on Charles Darwin's Theory of Evolution would be excluded from biology textbooks in the ninth grade (14 and 15 year olds) from next year on.

Students are "too young to understand 'controversial subjects'", he said, adding that the topic will be delayed until undergraduate study.

President Recep Tayyip Erdogan has already approved the proposed changes to the national curriculum, which are expected to be published next week after the Muslim Eid ending the fasting month of Ramadan.

"Turkey will be the second country after Saudi Arabia that excludes theory of evolution from its curriculum," says Feray Aytekin Aydogan, the head of Egitim-Sen - a teachers' union representing over 100,000 members across the country.

"Even in Iran, there are 60 hours of lessons on evolution and 11 hours on Darwin himself," she adds.

This has been brewing for some time in Turkey. Ten years ago, while the creationist movement had Adnan Oktar (nee Harun Yahya), as its voice, there was not unified support within the administration. That has changed.While there is resistance, it is not clear how much of it the new, conservative Islamic government will allow.
Posted by Jimpithecus at 6/28/2017 11:39:00 AM No comments:

Noah and the Dinosaurs

Sorry for the light posting.  I have been trying to beat into shape a BioLogos article on the new human remains from Jebel Irhoud.

Remember the kerfuffle when Ken Ham denied that people rode dinosaurs after Noah's flood and then was confronted with his own book that graphically showed exactly that? Well, AiG is now promoting a three-book series on the life of Noah called  The Remnant Trilogy.  The cover of the second book, Man of Resolve, has an illustration of Noah in a gladiatorial arena (not the first time AiG has ventured into this territory) facing, you guessed it: a dinosaur. Here is the cover: 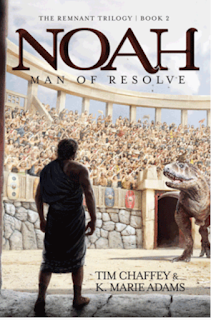 Here is the description:


As wickedness increases across the land, Noah and his loved ones endure painful consequences of a world bent on evil. King Lamech expands his rule through deception and force, but does his kindness toward Noah hint that things may change?

Noah and Emzara explore their world and their eyes are opened anew to the creative genius of the Most High, yet mankinds's wretchedness threathens to upend their peaceful corner of the world. While tracking down the perpetrator of a malicious crime, they are tested by tragedy and must decide if they will sacrifice everything for truth and justice.

After years of serving God, Noah reaches crisis of faith due to his mounting frustrations with the proliferation of sin and the apparent silence from the Creator. Thrust into a series of perilous situations, Noah's deepest convictions are challenged. His response will direct his course and change the world forever.

More than just a novel, Noah: Man of Resolve features non-fiction sections in the back of the book that provide answers to popular questions about the time in which Noah lived and explain where certain characters and events from the book can be seen at the Ark Encounter in Williamstown, Kentucky.

Reading this, I am reminded of that ghastly John Voight, Mary Steenburgen series Noah's Ark, by Robert Halmi, Jr., a few decades back. Christian fiction, or fiction based on Christian principles (e.g. C.S. Lewis and J.R.R. Tolkein) can be quite entertaining and provide real-world examination of one's faith and life.  The problem that I have is the last paragraph.  Aside from the shameless plug for AiG, the reader will be presented with half-truths and fiction presented as fact and may not know the difference.   Further, because it is fiction, it will have a wider audience.

The AiG perspective is that dinosaurs and humans really did coexist, despite absolutely no evidence of this.  David Menton and Ken Ham were to announce that they had proof that humans and dinosaurs roamed the earth at the same time but, as nearly as I can tell, no such proof ever materialized.

Mike Adams has a new column on the continuing travails of Bryan College and its embattled president Stephen Livesay.  Bryan, if you will remember, made the news when twenty percent of its faculty left after being required to sign a statement of faith supporting young earth creationism and a literal Adam and Eve.  More recently, it allied itself with Ken Ham and Answers in Genesis, which I am quite sure was, as much as anything, politically motivated.

Now it seems that there have been some financial irregularities to go on top of the religious ones.  Adams writes:


The present crisis dates back to 2009 when one of the founders of the National Association of Christian Athletes (NACA) was accused of sexual molestation. A proposal was made to sell a property owned by NACA, which is known as the Fort Bluff Camp, for an amount of $2.5 million. This would have covered NACA’s debt at the time, which was $900,000. Thus, it would have left them $1.6 million in the black. This is where Bryan College President Stephen Livesay gets involved. This is also where the gross financial misconduct begins.

Livesay managed to defeat the proposal to sell the land with an alternate proposal to get rid of the then-existing 13-member NACA Board. Livesay proposed a new 15-member NACA Board be put in its place. Elevating audacity to a Zen art form, Livesay suggested the following composition for the new NACA Board: Nine new members from the Bryan College Board and six members from the existing NACA Board. Unbelievably, Livesay proposed that he would be the one to choose all 15 members.

It goes downhill from there.According to Adams and other sources with whom I have spoken personally, the board is now little more than a mouthpiece for Livesay.  The last person who would stand up to him resigned from the board last year, as Adams notes.  From other sources, it became known that, as of a few years ago, Stephen Livesay was paying himself over $300k a year as president.  This after telling Todd Wood and the CORE Institute that the college didn't have the funds to continue supporting the institute.  This is going to get a whole lot worse before it gets better.  I hope that Bryan survives.  We were down there for a summer institute last summer with my son, Marcus, and it is a very pretty campus and the people there were very friendly.
Posted by Jimpithecus at 6/20/2017 09:17:00 PM No comments:

From Linda Blackford, of the Lexington Herald Leader:


Ark co-founder Mike Zovath said the attraction will attract its 1 millionth visitor by July, but there is no way to independently verify that number. He says all of Answers in Genesis, including the Creation Museum, will employ about 900 people this summer.

Locals do see cars and tour buses full of tourists eager to see the life-size wooden boat, filled with exhibits of young-Earth creationism, an animatronic Noah and friendly dinosaurs. What they don’t see is those tourists crossing over I-75 to drive the mile or two into downtown Williamstown to eat, drink and shop.

Main Street has been in decline since the 1970s, when I-75 replaced KY-25 as a major north-south artery that was filled with cars and people, locals say. The Ark was the first ray of hope the city had seen in years.

This is unfortunate. That was the ONE thing that I hoped that this would do.In fact, I had hoped that people would jettison the Ark Encounter and see northern Kentucky which is at the lower end of the tills from the last glaciation, and is a beautiful area.
Posted by Jimpithecus at 6/07/2017 10:19:00 PM No comments:

Ken Ham Claims He is Not a White Person

I just love Twitter!!!  Someone can make a perfect ass of themselves in a few seconds in the short space of 140 characters.  Ken Ham sent out a tweet that read thus:

Raw Story picks it up:


Ham’s renunciation of his own whiteness was met with instant ridicule by his Twitter followers, who pointed out the hypocrisy of someone who regularly uses religion as a divisive cudgel calling for everyone to overlook racial disparities.

Others, meanwhile, simply used Ham’s post to once again mock him for believing that the Earth is only 6,000 years old and that dinosaurs were present on Noah’s Ark.