Anatomically Modern Humans in the Levant at 55,000 BP


Nature News (the story appears in other outlets, as well) is reporting a new discovery of an anatomically modern skull cap in Israel, at Manot Cave.  The skull was found on a shelf and the associated deposits have been securely dated by uranium/thorium.  The skull is 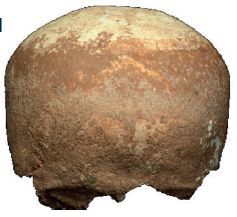 unquestionably modern, with the characteristic “house” shape. The maximum cranial breadth is high on the parietals and overall shape is rounded, rather than flattened, as in Neandertals.  Further, the rear of the vault is lacking the occipital bun present in Neandertals and the cranium is much shorter, having the length of a modern human.  Further compound the issue is that the Neandertals in the region from the sites of Amud and Kebara are, based on the best estimates, coeval in time with the Manot Cave specimen.


What happened between 90,000 and 45,000 years ago, a period ten times the length of recorded history? Only the fossils can tell us, and they are few. It seems that the earliest modern humans got to the Levant and no farther. Mount Carmel in Israel hosts caves, such as Qafzeh and Skhul, where H. sapiens remains appear in levels older than those occupied by Neanderthals, Homo neanderthalensis. The replacement of our own species by Neanderthals seems to be an affront to our prejudices. So how did humans eventually make it to Europe?

The partial H. sapiens skull from Manot Cave goes some way towards providing an answer, as well as hinting at how complicated our early history might have been. It looks much more modern than skulls from Qafzeh and Skhul. It is also much younger, suggesting that the hominin was closer, genetically and evolutionarily, to the earliest known European representatives of our species. This skull, the simple answer would suggest, represents modern humans poised to expand out of Africa and colonize the rest of the world.

Here comes the ‘but’. Our modern genomes contain Neanderthal DNA. At some point, our ancestors bred with Neanderthals before they became extinct. Does the Manot skull represent that moment? We simply do not know. Welcome, Manot skull, to messy reality.

If so, then these human/Neandertal hybrids would have been the group that colonized Europe and that is why we (some of us, anyway) see archaic traits in the earliest modern humans from Europe that date to between 35 and 25 thousand years ago. These traits are present mostly in the shape and contours of the vault in the Mladeč and Předmosti specimens from central Europe.  As these humans spread west, the archaic traits, which may have been under negative selection, diminished. Arguing against this hypothesis is that the Mladeč and Předmosti specimens are more archaic than the Manot Cave fossil.  Alternatively, the Manot Cave individual may represent the modern end of the spectrum of a population that does represent Neandertal/early modern hybridization and that contained a high degree of morphological variability.  Much is unclear.

The authors seem to think that there was not continuous evolution from the Skhul/Qafzeh humans, which date to around 100k BP, to the population represented by the Manot Cave individual and that the Manot Cave 1 specimen represents a later migration of moderns into the area, although this is based largely on the fact that there aren't fossils that span that time period.  The problem with this argument, of course, is that up until this this year, we didn't have the Manot Cave fossil, either.  Perhaps, the more persuasive argument is that the Skhul/Qafzeh fossils are quite a bit more archaic than Manot Cave 1 and are morphologically closer to late archaic Homo sapiens in the shape plot they provide (this mirrors my own research in this area).  On the other hand, a lot can happen in fifty thousand years and the required evolution could certainly have taken place.

That scenario is simplistic, but may explain some things that have confounded palaeoanthropologists for over fifty years.

After reading the paper, however, I am left with one question: What about the Herto cranium? It is a reasonably complete African cranium dating to around 150k that would provide a fantastic comparison and answer even more questions.
Posted by Jimpithecus at 1/29/2015 09:50:00 PM 2 comments:

Science Daily, as well as some other outlets are reporting new research on evidence that Australopithecus africanus used their hands in the same way that we use ours.  Focusing on the trabecular (spongy) bone patterns found in the metacarpals, they discovered that the wear and deposition patterns supported the hypothesis that they used their hands to perform precision and power "thumb to forefinger" tasks.  This is a huge step in the direction of making stone tools and using the hands for many other daily jobs.  The authors are quick to point out, however:


All early hominin metacarpal specimens generally exhibit high trabecular bone volume fraction like that of Pan and unlike that of the lower trabecular density of recent H. sapiens. However, the distribution of trabecular bone is similar to the distinct patterns of committed tool users and tool makers, H. sapiens and Neandertals.

This is an excellent example of a transitional trait. They began to adapt the power and precision grips while still maintaining arboreal tendencies and retaining some of the skeletal morphology of their ancestors. One more step on the road to humanity.
Posted by Jimpithecus at 1/23/2015 08:07:00 PM No comments:

In the Lafayette (or “laughalot” as one of my friends who went to Purdue once called it) Journal and Courier, we learn that state senator Jeff Raatz (political party should be obvious by this point) has crafted an “academic freedom” bill for Indiana public schools.  Dave Bangert writes:


Call it a back-door approach to failed attempts to chip away at state standards on teaching evolution and to bring creationism into the public school classroom, if you want, Raatz said. The bulk of the science world probably will, he figured. He considers it a call to action on critical thinking.

"As long as they do it respectfully," Raatz asked Tuesday, "why should we be afraid of that?"

This week, Raatz and Sen. Dennis Kruse — who has made a cottage industry out of taking swipes at evolution being taught in Indiana classrooms — filed a bill crafted from model legislation built by one of the leading anti-evolution think tanks in the United States.

And, gee, which think tank would that be? This is one of the most insidious campaigns that the Discovery Institute has undertaken.  Clearly aware that it is not legal to teach ID in the classrooms, they have promoted a stealth program to get evolution marginalized as much as possible, leaving ID as the preferred alternative.  Every single one of these bills that comes out has a common stamp on them, coming from the “academic freedom petition” template that originated from the DI. On its face, it seems innocuous enough, but, as Barbara Forrest found out, it is driven by an underlying agenda to rid the classroom of evolution.
Posted by Jimpithecus at 1/22/2015 08:27:00 PM No comments:

There is an article on the PhysOrg site that seems to be reporting support for the anthropic principle, a critical linchpin of Intelligent Design.  Here is what they say:


German scholar Ulf-G Meißner, chair in theoretical nuclear physics at the Helmholtz Institute, University of Bonn, adds to a series of discoveries that support this Anthropic Principle.

In a new study titled "Anthropic considerations in nuclear physics" and published in the Beijing-based journal Science Bulletin (previously titled Chinese Science Bulletin), Professor Meißner provides an overview of the Anthropic Principle (AP) in astrophysics and particle physics and states: "One can indeed perform physics tests of this rather abstract [AP] statement for specific processes like element generation."

What follows are some fairly standard "tweeking" arguments that have previously been put forth by a number of writers, including Hugh Ross. The article continues:

"Such extreme fine-tuning supports the anthropic view of our Universe," he adds.

"Clearly, one can think of many universes, the multiverse, in which various fundamental parameters take different values leading to environments very different from ours," Professor Meißner states.

Professor Stephen Hawking states that even slight alterations in the life-enabling constants of fundamental physics in this hypothesized multiverse could "give rise to universes that, although they might be very beautiful, would contain no one able to wonder at that beauty."

Professor Meißner agrees: "In that sense," he says, "our Universe has a preferred status, and this is the basis of the so-called Anthropic Principle."

For a major scientific news site such as PhysOrg to give this much space and credence to this argument is astounding. It is still a grand example of argument from personal incredulity, but there certainly is a growing sense that this is one very finely-tuned universe. It almost makes one think about accepting the ID argument. Almost.
Posted by Jimpithecus at 1/16/2015 11:28:00 PM 5 comments: