In Case You Happen To Live in Texas...

The Texas Freedom Network has released a voter's guide to the up-coming State Board of Education elections.  The astonishing thing about the first statement: "Science classes should NOT present creationism and/or "intelligent design" alongside evolution as credible scientific theories" is that, of nineteen candidates, only ONE agreed with that statement. This is a far cry from the Don McLeroy-dominated board of even a few years ago and, assuming some on the list are not prevaricating, a welcome change.
Posted by Jimpithecus at 9/29/2012 10:40:00 AM 3 comments:

The Fossil Record According to Creationism

Popular Science usually has some outlandish articles and truly goofy science news.  They ran this howler yesterday.  It is the Geological Time Scale According to Creationists as an infographic. 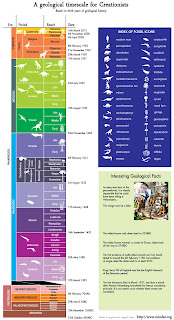 My favorite part is the comment that King Henry VIII was the last king of the Devonian period.  A tad irreverent in places but very funny, nonetheless.

It is now coming out that the “clocks” that are used to calculate mutation rates are badly calibrated. Ewen Callaway of Nature writes:


Geneticists have previously estimated mutation rates by comparing the human genome with the sequences of other primates. On the basis of species-divergence dates gleaned—ironically—from fossil evidence, they concluded that in human DNA, each letter mutates once every billion years. “It’s a suspiciously round number,” says Linda Vigilant, a molecular anthropologist at the Max Planck Institute for Evolutionary Anthropology in Leipzig, Germany. The suspicion turned out to be justified.

Now it seems that the clock is off by half. This means that a bunch of divergence dates can be recalculated. One is particular is mentioned:


Take the 400,000–600,000-year-old Sima de Los Huesos site in Atapuerca, Spain, which yielded bones attributed to Homo heidelbergensis, the direct ancestors of Neanderthals. Genetic studies have suggested that earlier ancestors of Neanderthals split from the branch leading to modern humans much more recently, just 270,000–435,000 years ago. A slowed molecular clock pushes this back to a more comfortable 600,000 years ago.

It isn't a magic bullet, there are still some kinks to be worked out but it has remarkable potential for getting a handle on when the Denisova genome might have arisen.It might also give us a believable figure for the LCA of apes and humans since the current, 5 million year date is plainly not so.
Posted by Jimpithecus at 9/19/2012 10:37:00 PM 4 comments:

I am working on my next BioLogos post and trying to not fall behind in teaching my class, which, because of the new online format, is eating my lunch. I will try to get something up in a bit.
Posted by Jimpithecus at 9/17/2012 02:21:00 PM No comments:

One of My Favorite Quotes

My wife and I have been invited to a bible study tonight and, to hear of it, the topic might be the creation/evolution debate. I think it is time to remember a favorite quote of mine by a giant in the evangelical world: Billy Graham. He once upon a time wrote:

“I don't think that there's any conflict at all between science today and the scriptures. I think that we have misinterpreted the Scriptures many times and we've tried to make the Scriptures say things they weren't meant to say, I think that we have made a mistake by thinking the Bible is a scientific book. The Bible is not a book of science. The Bible is a book of Redemption, and of course I accept the Creation story. I believe that God did create the universe. I believe that God created man, and whether it came by an evolutionary process and at a certain point He took this person or being and made him a living soul or not, does not change the fact that God did create man. ... whichever way God did it makes no difference as to what man is and man's relationship to God.”

Nature News is reporting that the South Korean government has gone on the offensive, urging textbook makers to ignore requests to remove information on evolution from high school textbooks. Soo Bin Park writes:

The move follows a campaign earlier this year by the Society for Textbook Revise (STR), which argued that details about the evolution of the horse and of the avian ancestor Archaeopteryx should be removed from the books (see ‘South Korea surrenders to creationist demands’).

The STR, an offshoot of the Korea Association for Creation Research, says that students should learn “various” theories about the development of life on Earth. It argued that the textbooks used flawed examples of evolution that are under debate by evolutionary scientists.

The Discovery Institute is running a conference titled Science and Faith: Friends or Foes? on October 12-13 at Covenant Seminary in St. Louis. A quick look at the speakers reveals that the conference is heavy on the ID side, with Paul Nelson, Ann Gauger, Jay Richards and John West featured prominently. Attend at your own risk.