Gallup has released a new poll on what people think about human evolution.  Here is their takeaway blurb:


Forty percent of U.S. adults ascribe to a strictly creationist view of human origins, believing that God created them in their present form within roughly the past 10,000 years. However, more Americans continue to think that humans evolved over millions of years -- either with God's guidance (33%) or, increasingly, without God's involvement at all (22%).

Beyond this are details in the numbers.The poll was conducted from June 3-16 and contained a random sample of 1015 adults.  Some of this is not new and has changed little since the last poll.  There is a high correlation between those with a college education and those who accept human evolution.  The correlation is also high between those who have no religious affiliation and those who accept human evolution.

Other interesting tidbits from the attached PDF:
There are more observations buried in the data. Have a look.
Posted by Jimpithecus at 7/28/2019 02:48:00 PM No comments:

Chris Stringer has a post in the Financial Times titled Meet the Relatives.  It is sort of a whirlwind tour through the evolution of the genus Homo.    He writes:


The discoveries of Homo floresiensis, Homo luzonensis, Denisovans and Homo naledi in the past 15 years remind us that the fossil record of humans is still very patchy — stone tools are scattered across much of Africa as a witness to widespread human occupation, yet fossil evidence has been recovered from less than 10 per cent of that continent’s area.

The percentage coverage for Asia is hardly any better: there is, for example, currently only one significant human fossil from the whole of the Indian subcontinent. The discoveries of the past few years underline just how much evolutionary history remains unknown, with other extinct lineages no doubt still to be revealed.

Many of the new finds challenge how we classify fossils in relation to Homo sapiens today. I continue to call the Neanderthals a different species from us, based on their distinctive skeletons and skulls; others feel that the recent evidence of interbreeding and increasing evidence of sophisticated behaviour mean that we should merge them, and the Denisovans, into our species.

I think that the discovery of the Xuchang hominins indicates that there has been considerable population mixing for several hundred thousand years.  As I wrote at the time:


These two Chinese skulls stand at the crossroads of these population movements. While showing clear Neandertal characteristics, they also express modern traits, possibly reflecting mixing with the late, modern human arrivals represented by the recent modern human finds at Daoxian. Yet they also express a clear link to ancient East Asian populations. The implications of these skulls are stark: there has been widespread population mixing and regional continuity in Europe and Asia for at least 400 thousand years. Not only did the Neandertals feel enough cultural kinship to mate and have children with these East Asian people, the early modern humans coming out of Africa did, as well. As Chris Davis of China Daily News put it: “One big happy family.”

Whether this represents such behavior at the peripheries of different species or that of one polytypic species is, as yet, unclear.  It is very clear that our understanding of how these populations interacted is rudimentary, at best.
Posted by Jimpithecus at 7/27/2019 10:57:00 AM No comments:

Earliest Art Made By Humans?

Artnet News has a post on a discovery in Henan Province, China that purports to be the oldest indications of consciously-created art.  From Sarah Gascone:


Abstract patterns carved on bone fragments discovered in China could be the oldest art ever made, dating back to between 105,000 and 125,000 years ago.

The marks on two bones were found at a site in Henan Province thought to be populated by Denisovans, an extinct species or subspecies of ancient humans, according to a new study in the Cambridge University Press journal Antiquity. The markings on the weathered rib bones contain traces of ochre on one specimen, the earliest evidence of pigment’s use for decorative purposes.

The newly discovered artworks pre-date even the 73,000-year-old markings—thought by some to be abstract drawings—found last year on a rock excavated from a South African cave, and previously thought to be the earliest-known example of human artistic activity.

Here is an image of the markings: 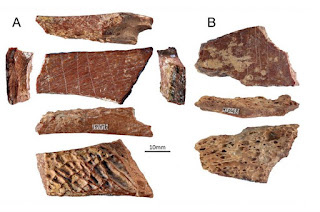 There seems to be a persistent thought that people of this age simply could not make art of this kind. I think it more stems from the fact that this kind of representation rarely survives in the fossil record. We know that as far back as 300k, there was division of labor and that there was quite a bit of population mixing this far back.  There is also a record of Neandertal cave paintings at 65k.  It is nice to find this kind of artistic expression but it ought not to surprise us.

Since the advent of population genetics and modern techniques to examine DNA, research has focused on, first, Mitochondrial DNA and then nuclear DNA.  Now we have another weapon in our arsenal.  Matthew Warren of Nature News relates new research done on palaeoproteomics.  This is the study of proteins found in fossilized human ancestors.  How is this possible, you ask?


Some time in the past 160,000 years or so, the remains of an ancient human ended up in a cave high on the Tibetan Plateau in China. Perhaps the individual died there, or parts were taken there by its kin or an animal scavenger. In just a few years, the flesh disappeared and the bones started to deteriorate. Then millennia dripped by. Glaciers retreated and then returned and retreated again, and all that was left behind was a bit of jawbone with some teeth. The bone gradually became coated in a mineral crust, and the DNA from this ancient ancestor was lost to time and weather. But some signal from the past persisted.

Deep in the hominin’s teeth, proteins lingered, degraded but still identifiable. When scientists analysed them earlier this year, they detected collagen, a structural support protein found in bone and other tissues. And in its chemical signature was a single amino-acid variant that isn’t present in the collagen of modern humans or Neanderthals — instead, it flagged the jawbone as belonging to a member of the mysterious hominin group called Denisovans. The discovery of a Denisovan in China was a major landmark. It was the first individual found outside Denisova Cave in Siberia, where all other remains of its kind had previously been identified. And the site’s location on the Tibetan Plateau — more than 3,000 metres above sea level — suggested that Denisovans had been able to live in very cold, low-oxygen environments.

As the author notes, this kind of research has opened many other doors that, up until now, have been shut to researchers. The realization that proteins have much longer staying power than DNA could radically reshape our understanding of human evolution:


Previously, scientists had recovered proteins from 1.8-million-year-old animal teeth and a 3.8-million-year-old eggshell. Now, they hope that palaeoproteomics could be used to provide insights about other ancient hominin fossils that have lost all traces of DNA — from Homo erectus, which roamed parts of the world from about 1.9 million to 140,000 years ago, to Homo floresiensis, the diminutive ‘hobbit’ species that lived in Indonesia as recently as 60,000 years ago. By looking at variations in these proteins, scientists hope to answer long-standing questions about the evolution of ancient human groups, such as which lineages were direct ancestors of Homo sapiens.

Whether that level of resolution will ever be possible remains to be seen, especially given that the modus operandi of modern palaeontology is focused on clade relationships. It will be interesting to see.
Posted by Jimpithecus at 7/09/2019 09:41:00 PM No comments:

Patterns in the Fossil Record

Science Daily has a post on research about patterns in the fossil record that comes out of the Santa Fe Institute.  They write:


Throughout life's history on earth, biological diversity has gone through ebbs and flows -- periods of rapid evolution and of dramatic extinctions. We know this, at least in part, through the fossil record of marine invertebrates left behind since the Cambrian period. Remarkably, extreme events of diversification and extinction happen more frequently than a typical, Gaussian, distribution would predict. Instead of the typical bell-shaped curve, the fossil record shows a fat-tailed distribution, with extreme, outlier, events occurring with higher-than-expected probability.

While scientists have long known about this unusual pattern in the fossil record, they have struggled to explain it.

Now, at last, there is something of an answer.


“Within a lineage of closely related organisms, there should be a conserved evolutionary dynamic. Between different lineages, that dynamic can change,” says [Andy] Rominger. “That is, within clades, related organisms tend to find an effective adaptive strategy and never stray too far. But between these clade-specific fitness peaks are valleys of metaphorically uninhabited space. It turns out, just invoking that simple idea, with some very simple mathematics, described the patterns in the fossil record very well.”

Sometimes, it just pays to rethink something from a different angle. This may open up doors to understanding other patterns in the fossil record.
Posted by Jimpithecus at 7/08/2019 10:26:00 PM No comments: