WKYT TV has a note on how the county that gave tax incentives for the building and marketing of the Ark Encounter is going broke:


Ham said the Ark hosted 500,000 visitors in the six months it was open in 2016. A staffer said about 645,000 guests have visited the 510-foot replica of Noah’s Ark. Ham called the Ark a success but its success has not had quite the ripple effect that many in Grant County expected.

“It’s been a great thing but it’s not brought us any money,” said Grant County Judge-Executive Steve Wood during a break from a budget meeting.

The county is teetering on bankruptcy and is trying to balance the budget. Wood said they were to the point where jobs may have to be cut. He will propose a 2% payroll tax at next week’s fiscal court meeting. He blames prior fiscal courts for the budget crisis, not the Ark. But he said the Ark had not lived up to its promise.

What seems to be happening is that the people that are coming to the Ark Encounter aren't patronizing the local establishments or adding to the local economy at all. Even the passing of a bill authorizing the building of bars didn't help.  Hermant Mehta at Patheos has some thoughts about this:


The types of businesses that cater to alcohol-drinking customers aren’t swayed by a theme park aimed at fundamentalist Christians.

Despite people visiting Ark Encounter right now, business owners don’t see it as a long-term success and don’t want to invest in the surrounded areas as a result.

Whatever the reason is, it seems fair to say that Grant County leaders doubled down on the idea that Ark Encounter would create tremendous economic benefit for everyone in the area. That hasn’t happened yet. There are also no signs that that will change in the future. They gambled and lost, and they were duped by the Creationists who promised them the world.

I am trying to work up sympathy for the local government who, over protests, authorized these tax breaks. They bought into the Disneyization of Christianity and, rather than see people coming to Christ, they saw dollar signs.
Posted by Jimpithecus at 2/28/2017 09:42:00 PM No comments:

A new diorama is being created for the Ark Encounter, in Petersburg, Kentucky that is said to depict gladatorial combat between men and dinosaurs.  Raw Story has this:

Ham is the director of Answers in Genesis, a fundamentalist Christian sect who believe that the earth is only 6,000 years old and that humans, dinosaurs and apparently giants coexisted rather than being separated by millions of years.

“Scientists estimate that dinosaurs died out 65 million years ago, or a good 64.8 million years before the first homo sapiens, who evolved roughly 200,000 years ago,” said Mazza. 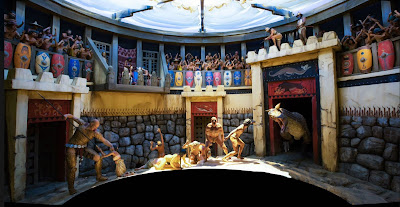 This is the relevant biblical text for this time period:


6 When human beings began to increase in number on the earth and daughters were born to them, 2 the sons of God saw that the daughters of humans were beautiful, and they married any of them they chose. 3 Then the Lord said, “My Spirit will not contend with[a] humans forever, for they are mortal[b]; their days will be a hundred and twenty years.”

4 The Nephilim were on the earth in those days—and also afterward—when the sons of God went to the daughters of humans and had children by them. They were the heroes of old, men of renown.

5 The Lord saw how great the wickedness of the human race had become on the earth, and that every inclination of the thoughts of the human heart was only evil all the time. 6 The Lord regretted that he had made human beings on the earth, and his heart was deeply troubled. 7 So the Lord said, “I will wipe from the face of the earth the human race I have created—and with them the animals, the birds and the creatures that move along the ground—for I regret that I have made them.” 8 But Noah found favor in the eyes of the Lord.

Even assuming that this passage is to be taken literally (and make no mistake, there is no evidence whatsoever for the world-wide flood that follows later in this book), the passage makes no mention of gladiator-style combat, bread and circuses, or large, prehistoric beasts.  Like so many other things in creationist literature, these are all add-ons to the text.  These were added by Mr. Ham to emphasize the “wickedness” of this generation and the presence of “giants.”

Ken Ham has a peculiar relationship with dinosaurs, once denying that they were ridden off the ark, only to be confronted with a picture out of a book that he, himself, had written showing just that.

Dinosaurs are a particular problem for young earth creationism because, if, indeed, they were ridden off the ark, then their almost immediate demise has to be accounted for.  What would have caused them to die off...all of them...at once...without leaving any kind of historical record?  There are no tales of dinosaurs eating people and being hunted to extinction in any literature.  Given that this was only 2400 B.C., wouldn't some of them have survived?  Why aren't they mentioned by either the Chinese or Egyptians, who both had thriving civilizations at this time.  Surely some of the smaller ones would still be walking among us.

No, in fact, there is not a single dinosaur still living.  We have their descendents, in the form of birds and a wealth of evidence for the transition from the maniraptoran line to modern Aves, but no dinosaurs still exist.   Creationists have yet to satisfactorily address this question.

Darwin Day at the University of Tennessee

Darwin Day week kicks off tomorrow at the University of Tennessee, with a science parade.  The Daily Beacon has more:


Throughout the week, Darwin Day festivities will continue on Pedestrian Walkway, where students can learn about upcoming events and meet Charles Darwin and Alfred Russel Wallace in mascot form. Darwin Day organizers will also be advertising for the event’s Keynote Speaker Stacey Smith from the University of Colorado Boulder.

On Monday, Feb. 13, at noon, Darwin Day organizers will participate in a science parade that marches from the Hill to inform students about Darwin, Wallace and their work involving evolutionary biology.

Later that day at 7 p.m. in the Cox Auditorium, Smith will present her lecture “Beg, borrow and steal: the nefarious history of flower power” to discuss the adaptive evolution of plants over time.

All of the events are volunteer-run and designed to educate the public on evolutionary biology and its importance in modern society and politics. The idea is to promote scientific thought in a non-confrontational way in order to combat anti-science movements.

“(The events are being put on) to recognize this very important historical figure who has done so much to the understanding of biology, and of course, it drives so much of natural selection, and likewise, drives what has happened and what is happening in the world today,” Chapman said.

Come if you can. This is an annual program to honor one of the founders of evolutionary theory and is always quite a bit of fun.
Posted by Jimpithecus at 2/11/2017 09:14:00 PM 1 comment:

Ken Ham says that evolution is religion.  In an interview with The Christian Post, Jeannie Law writes:


"You see, evolutionists have beliefs just like creationists have beliefs. For instance, this movie — 'Is Genesis History?' — the Ph.D. scientists that are in this movie, their role as scientists in a modern world is to show that observational science confirms the Bible's history about creation, and then the flood, the tower of babble," Ham stated. "So it's not science and creation, it's not science and religion, it's really a battle of two worldviews."

The 65-year-old describes it as a conflict of two starting points — God's word or man's word. He said the dispute lies in historical science, which is science about beliefs in the past. Some believe in what God says happened throughout history and others believe in what men say.

"So it's really a battle between two religions. Evolution, that's a religion. It's really the pagan religion of this age to explain life without God," he argued. "There's always been a battle of two religions since the beginning."

Is Genesis History? is a new film out from The Truth Project, an organization that has a record for botching truth when it comes to science.  Steven Martin wrote, in 2009, the following:


Focus on the Family is promoting their “Truth Project” to churches and small groups. A quick look at the lesson overview shows that, ironically, the Truth Project doesn’t seem to put much stock in truth when it comes to science (see lesson 5). For example, this lesson states that “Darwinian theory transforms science from the honest investigation of nature into a vehicle for propagating a godless philosophy”. Completely untrue.

If you phrase the study of evolution in this way, you don't have to address the scientific merits of the theory. Instead, this is a craven appeal of the emotions of Christians to get them to reject the perfectly valid scientific theory of evolution because it is not of God.

Ken Ham's entire talking point for this perspective is his mistaken impression that we cannot reconstruct the past.  He is quoted as saying:


"When it comes to knowledge of our past, concerning our origins, that knowledge is very different because now you're talking about, 'How did the universe come into being [when] I wasn't there to see that happen?'" Ham explained.

This is completely facile and betrays a complete lack of understanding of how science works. Indeed, daily events require us to reconstruct events for which we were not present. This is no different than reconstructing a crime scene or conducting an archaeological excavation, in which we reconstruct past events. Would Ken Ham actually have us believe that we cannot know anything about our past because we weren't there? That is nothing short of idiotic and comes from someone who has no understanding of science.

Off-Topic: I have complained to the Christian Post about their website before.  When I went to the site today, a video ad that covered the right side of the screen auto-loaded and played, which I watched and then stopped.  While I was writing the post, the stupid video reloaded and played three more times.  This kind of thing is what is ruining the internet.
Posted by Jimpithecus at 2/11/2017 07:40:00 PM No comments:

Donald Trump has tapped Jerry Falwell Jr. to lead an education reform task force.  As the Independent Puts it:


Mr Falwell was quick to throw his support behind Mr Trump, and the New York tycoon travelled to his university in Virginia and spoke to students, somewhat mangling a bible reference.

At a campaign even in Davenport, during the Iowa caucuses, Mr Falwell said he had decided to back Mr Trump “because the country is at that point”.

At Mr Falwell’s Lynchburg campus, the science hall is reportedly stocked with the latest laboratory equipment, including a gene sequencer and a nuclear magnetic resonance spectrometer. However, faculty members teach evolution alongside biblical creationism.

Interestingly, most of the headlines that I enountered, referred to the younger Falwell as “creationist” without actually quoting anything he has said that gives that away. It is certainly true that Liberty University (ironically where Ted Cruz began his presidential campaign) teaches creationism by default and the older Falwell was an ardent anti-evolutionist. Still, if I cannot point to something to give substance to my fears, I will hold off thinking this is necessarily a bad thing.

Much, much nonsense has gone on in the colleges and universities all over the country in the last few years. It is pretty clear that something needs to be done.
Posted by Jimpithecus at 2/03/2017 11:46:00 PM No comments: