Parents, save your kids before its too late. 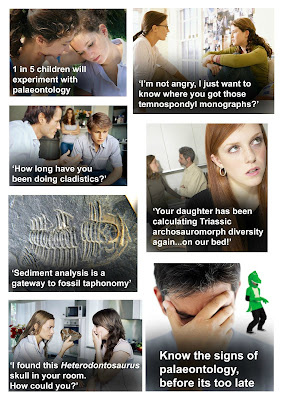 Meanwhile, Over in North Carolina...

The Raleigh NewsObserver is reporting on the doings of a Wake County high school science teacher who has given an assignment asking students to, if they so desire, write a paper supporting a recent earth creation model of the earth's origins.  The authors write:


School officials say the assignment, in which the teacher gave his students the option of doing an extra-credit project on evolution or creationism, was inappropriate because the state curriculum doesn’t include creationism. The situation at Wakefield Middle School in North Raleigh highlights the challenge public schools face when discussing how life began...At Wakefield, eighth-grade science teacher Adam Dembrow gave students an extra-credit opportunity last month to do a poster and paper either on “your interpretation of a religions (sic) Creation” or on “any evidence on the theory of evolution, which can be used to support the theory of evolution.”

Much is unclear in this report. Is he trying to get his students to understand the shortcomings of the YEC model? Is he trying to get them to compare standard science with YEC? Even I make cursory mention of the YEC model in my “History of Science” lecture for my intro to physical anthropology class.  I also have, as an extra credit assignment, assigned a question such as "read an article on the intersection of science and religion and evaluate it."  Additionally, it is never a problem to give an assignment asking students to address evidence for evolution.  That gets them into the evidence, itself.

While the recent Tennessee law is clearly a bad idea, I do not think that we need to jump out of our skins every time a teacher mentions the young earth model.  That is just overreacting.

It has always been my contention that if we actually brought creationism into the classroom and taught the evidence for it honestly and with scientific integrity, students would see it for the stinkweed that it is and not embrace it.
Posted by Jimpithecus at 4/20/2012 09:42:00 PM 4 comments:

According to an article in the Tennessean, the new “monkey bill” may change nothing about the way science is taught. Here is the accompanying video. The first speaker intelligently lays out her opposition to the bill, the second one not so much.

Supporters of Tennessee’s newest education law envision classrooms where teachers lead robust conversations about evolution, analyzing its strengths and weaknesses with students who are freshly engaged with this new approach.

Creationism wouldn’t be mentioned, they say. Neither would intelligent design. Teachers know those would violate the First Amendment, plus the new law expressly forbids promoting religious doctrine.

“I trust science teachers are smart enough to keep the discussion on a scientific level,” said Casey Luskin, a policy analyst with the Discovery Institute, which wrote a model bill Tennessee lawmakers consulted. “I don’t see why anyone would bring religion into the discussion.”

I sometimes wonder if Casey says these things because he actually believes them or if he hopes that his listeners will. It is remarkably naive because he knows good and well (or he ought to) that, when polled, over 10% of science teachers actually support teaching creationism. It is also naive in that, during the Dover trial, it became clear that some members of the school board were committing terminological inexactitudes. They said they wanted "critical thinking" about evolution when they really wanted creationism. She continues:

Tennessee’s law isn’t the same as the Dover school board’s policy, but it sets up conditions for a lawsuit, said Vic Walczak, an ACLU attorney who represented the Dover, Pa., families.

“It basically neuters school boards and administrators from disciplining teachers who run off the rails,” he said. “And when the district gets sued by a parent, the teacher gets off scot-free? Why would you do that?

You would do that if you wanted creationism taught in the public school.

My latest installment at BioLogos on human origins is up and can be found here. As always, comments are welcome both here and there.

Tennessee Governor Bill Haslam has allowed SB893 to stand, effectively making it law. As he is quoted in the Nature News story:

“I do not believe that this legislation changes the scientific standards that are taught in our schools or the curriculum that is used by our teachers,” Haslam said in a written statement explaining his equivocal stance. “However, I also don’t believe that it accomplishes anything that isn’t already acceptable in our schools.”

The Nature News story points out a way in which the bill differs from the one in Louisiana.

But in Tennessee, unlike in Louisiana, the law requires teachers to stay within the state science curriculum. So the ramifications of the law will depend on how local teachers and school boards interpret that requirement. “There are school districts in Tennessee that don’t pay any attention to the state curriculum,” says Timothy Gaudin, a biologist at the University of Tennessee in Chattanooga. “So there are some people who are going to do what they want to do no matter what.”

This gives them the cover to do so. I suppose the question I have for Governor Haslam is that if it is not going to accomplish anything, and you don't want to sign it, then why not veto it? This just smacks of political pandering, especially in light of the scientific opposition to the bill. Not a bright and shining moment for Tennessee.
Posted by Jimpithecus at 4/11/2012 10:23:00 PM No comments:

John Derbyshire has been fired by the National Review for controversial remarks he made in a post for Takimag. Whether he should have been fired or not I have no idea since I cannot get the Takimag link to work. I do know that he, once upon a time, wrote an extraordinarily insightful post on George Gilder and Intelligent Design, to wit:

George’s own Discovery Institute was established in 1990; the offshoot Center for Science and Culture (at first called the Center for the Renewal of Science and Culture) in 1992. That is an aggregate 30 years. Where is the science? In all those years, not a single paper of scientific standing has come out of (nor even, to the best of my knowledge, been submitted by) the DI or the CSC. I am certainly willing to be corrected here. If the DI or CSC have any papers of scientific standing — published or not — I shall post links to them to NRO for qualified readers to scrutinize.

Scientists discover things. That’s what they do. In fast-growing fields like genomics, they discover new things almost daily — look into any issue of Science or Nature. What has the Discovery Institute discovered this past 16 years? To stretch my simile further: Creationists are walking into that room full of pilots and aeronautical engineers right at the peak of the Golden Age of flight, never having flown or designed any planes themselves. Are they really surprised that they get a brusque reception?

If his firing is warranted, that is too bad. At times, he could be smack on the money.

No Posts for a bit

My wife's father passed away this week and the funeral is this coming week. Add to that I have to get my class written and I have to get a BioLogos post resubmitted and it adds up to no posts for a bit. Sorry.
Posted by Jimpithecus at 4/08/2012 03:09:00 PM 4 comments:

Lauri Lebo, writing for Scientific American, has written an expose on the origins of HB368/SB893. In it, she points out that these academic freedom bills have particular origins which underlie their true point:

Sponsor Rep. Bill Dunn (R–Knoxville) said [David] Fowler [head of the Family Action Council of Tennessee] submitted the legislation to him in early February. The latter's organization is associated with James Dobson's conservative Christian Focus on the Family and advocates for "biblical values" and "godly officials".Dunn could not explain why a Christian organization would be pushing legislation that supposedly has nothing to do with inserting religion into science class. He referred the question to Fowler.Fowler, who would not say whether he is a young earth creationist ("I think that's irrelevant," he noted), said he is trying to correct the "dogmatic" presentation of science in the classroom. "This is about open discourse," he said, adding, "Good education requires critical thinking."Fowler has spoken with members of the Discovery Institute—he would not say specifically whom—and said he drafted the Tennessee bill based on sample legislation the Institute created.Dunn explains: "We've reversed the roles of the Scopes Trial. All we're saying is let's put all the scientific facts on the table."

Why, indeed, is a bill such as this being pushed so heavily by a Christian organization if it has no religious elements to it? What is “in it” for them? Here is where the bulls**t detector goes off. Just once, I would like one of these organizations to be honest about why they want this legislation passed. Is it too much to ask that of fellow Christians? This kind of thing leaves a very bad taste in the mouth of your average scientist, who already regards organized Christianity as hostile to them (and why wouldn't they?). It has the same effect on your average EC, and just reinforces the notion that modern evangelicalism is sadly off-base and headed in the wrong direction.

Where is Todd's Letter?

Panda's Thumb noticed something that I also did a few days ago. In this post, I commented on Todd Wood's letter to Governor Bill Haslam but remarked at the time that the link was busted. PT has noticed that there is still no link and suspects foul play. Nick Matzke writes:

Wood’s argument as stated wasn’t all that convincing, really – the law is necessary if your goal is to push creationism in public schools without getting in trouble, for instance. My gut instinct is that what was really going on was that Wood, for a long time one of the only self-critical, independent, and somewhat realistic voices within creationism, just doesn’t think that pushing ID/creationism via government power and the public schools is a good idea. It’s not even good for creationism – pushing your ideas in the public schools before they are accepted in the scientific community will instantly discredit your movement within science; it leads to heated political battles rather than academic discussion; and inevitably it has historically led to expensive and embarrassing court defeats for creationism, and tighter legal restrictions against teaching creationism.

Matzke opines (and I agree in the absence of anything to the contrary) that Wood, who is not your average creationist, got his hand slapped. I certainly hope that this is not the case as his is about the only sane voice (mostly) in the entire world of creationism. If someone has reined him in, that spells trouble.

It feels, in some respects, like the Bruce Waltke fiasco of a few years back where he stated that the Christian community needed to acknowledge the importance of the evolution evidence and was summarily drummed out of his position at Reformed Theological Seminary for saying so.

At Sunday school this weekend, one of the topics that came up was persecution of Christians. Every single person in the room, to a man or woman, stated that they had received more persecution from fellow Christians about their beliefs than by non-believers. How sad is that?