The Atlanta Journal Constitution Weigh In

In what can only be described as a heavy-handed editorial, Maureen Downey had written a column on the recent Cobb County decision:

To see evidence of evolution, look no further than the Cobb County Board of Education. From a tax-frittering, pseudo-science muddle, the board seems to be evolving into a deliberate and engaged panel capable of putting the reputation and credibility of the district ahead of politics or personal creeds.

While it is probably true that the decision was correct, the evolution sticker side acted in good faith and with good motives. Ms. Downey makes no attempt to hide her contempt for them. Not professional.

A new report in Foxnews indicates that humans may have wiped out the megafauna in Australia some 10k years ago. This is what is also been suggested to have happened in the New World around the same time period.

We like to romaticize the Native Americans and Native Australians and think that they were "close to the land." The fact of the matter is that, as humans, we haven't changed much over time.
Posted by Jimpithecus at 12/28/2006 10:08:00 PM No comments:

Getting onto the bandwagon a bit slowly. I discovered that if you type in "Intelligent Design" into the search engine at YouTube, you get a bunch of videos, including some lectures. Nifty.
Posted by Jimpithecus at 12/27/2006 02:28:00 PM No comments: 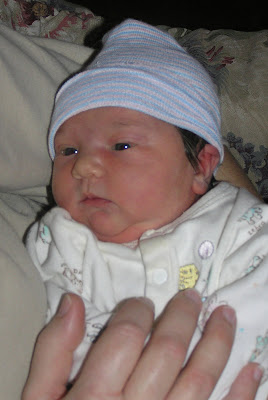 Sorry for the light posting

I have torn some muscles in my back and have not been able to sit for any period of time for about two weeks. Sorry for the light posting.

One thing did cross my path in the last week. In a press release by the organization Americans United for the Separation of Church and State (an organization I can throw a little bit further than I can the ACLU, but not much), the Cobb County Georgia sticker brouhaha seems to have been settled. Part of the release states,

In an agreement announced today, Cobb County school officials state that they will not order the placement of “any stickers, labels, stamps, inscriptions, or other warnings or disclaimers bearing language substantially similar to that used on the sticker that is the subject of this action.” School officials also agreed not to take other actions that would undermine the teaching of evolution in biology classes.

ID on a Grand Scale

For years, ID folks like Hugh Ross have been championing the "Anthropic Principle," which states, in somewhat simplified terms, that the universe is tweaked in such a way to make life possible and that if certain parameters (such as the age of the universe, the electromagnetic and gravitational forces) were a hair off, life would not exist. The Constant is the force that drives the universal expansion. As the story notes:

Quantum physics predicts the cosmological constant should be far larger than what is actually seen: roughly 10 to the 120th power larger, a number represented by 1 with 120 zeroes behind it. By comparison, [Steven] Weinberg's original estimate was off just by roughly a hundredfold, and refined versions of this argument claim greater accuracy, suggesting anthropic reasoning could provide answers quantum physics currently cannot.

Others are not convinced.

"The specifications used to allow life are rather arbitrary and can lead to very different expected values for fundamental constants," Starkman told SPACE.com.

Seems to me that you still have the other 28 dimensionless variables to deal with, though.

This will get all the "origins of life" people hopping. A meteorite that fell in the Yukon and northern BC appears to have organic material in it. According to the National Geographic story by Brian Handwerk:


The meteorite likely formed in the outer reaches of the asteroid belt, but the organic material it contains probably had a far more distant origin.

The globules could have originated in the Kuiper Belt group of icy planetary remnants orbiting beyond Neptune. Or they could have been created even farther afield.

Whether this lends credence to the hypotheses that life on earth is extraterrestrial in origin remains unclear. Stay Tuned!

That paragon of intrepid reporting, the Onion, has revealed that Kansas lawmakers have outlawed evolution. As the report notes:

"Barn swallows that develop lighter, more streamlined builds to enable faster migration, for example, could live out the rest of their brief lives in prison," said Indiana University chemist and pro-intelligent-design author Robert Hellenbaum, who helped compose the language of the law. "And butterflies who mimic the wing patterns and colors of other butterflies for an adaptive advantage, well, their days of flaunting God's will are over."

This is truly a major step in legislation.