Alex Berezow, of the American Council on Science and Health, writes that Bill Nye is a terrible spokesman for science.  He writes:


It was clear that something was amiss a few years ago when, amid Nye's renewed celebrity status, it came to light that he aired an episode of Eyes of Nye that perpetuated anti-GMO propaganda. Nye was subsequently criticized by the scientific and (especially) science writing communities. Not long thereafter, Nye had a change of heart.

Good! Better late than never. But was this "conversion" based on a new understanding of biotechnology or simply a calculated marketing move? Evidence points toward the latter. As late as 2015, Nye was still pushing anti-GMO nonsense. That year, he published a book called Undeniable, which promoted evolution over creationism. The book entirely lacked references (quite bizarre for a science book)...

Yes, it was bizarre. I read the book. It was awful, filled with vague arguments, invective and special pleading. Probably the low point for Nye, however, has to be a complete 180° turn around on sex and gender.  In the original show, he had a segment on people that were XY and people that were XX and he described them accurately as men and women and argued that you couldn't change that.  Now, with Bill Nye 2.0 we get “My Sex Junk” (warning: do not watch if you do not have a strong stomach).  Berezow continues:


Ultimately, it seems that Bill Nye just panders to whatever he thinks the audience wants to hear. He thought (incorrectly) that they wanted to hear why GMOs were bad, so he altered his message when he got pushback. He won't get pushback for exaggerating climate change, so it's likely he'll keep this up for a while.

Nye is disdainful and contemptuous of young-earth creationism, yet employs exactly the same shtick that they do: pontificate in areas of which they have knowledge.  Unfortunately, now, people will remember Nye for the new show and not the informative old one, where he seemed to know his limitations.
Posted by Jimpithecus at 5/18/2019 10:48:00 PM No comments:

William Reville, writing for the Irish Times, argues that the strategy that many of the outspoken atheists have of trying to promote science over religion is not working:


Associating science with secularism exposes science to collateral damage when secularism is resisted and Harrison summarises: “The thesis that science causes secularisation simply fails the empirical test and enlisting science as an instrument of secularisation turns out to be poor strategy.”

Why then do prominent scientists such as Richard Dawkins, Sam Harris (“Science must destroy religion”), and the late Stephen Hawking (“Science will win because it works”) still campaign to replace religion with science? Firstly, it seems to me that if these scientists knew their history they would realise that they are supporting a failed strategy. Secondly, the specific factors that motivate these scientists, and understandably so, such as fundamentalist terrorism and creationism, are also vigorously opposed by mainstream religion. Yet they campaign against all religion, the mainstream as well as the extreme fringes.

Dawkins has a history of using this strategy, to the point of arguing that bringing kids up in a religious home is tantamount to child abuse. That doesn't wear very well.It is a short read but worth it.  Readers of this blog know that I am a Christian but oppose young-earth creationism because I believe it to be scientifically groundless, theologically suspect and a millstone around some believers' necks who are struggling with the data.
Posted by Jimpithecus at 5/17/2019 10:19:00 PM No comments:

Bat-Winged Dinosaurs in the Jurassic

“From there to here, from here to there, funny things are everywhere.” —Dr. Seuss

A new discovery in China (natch) indicates that, during the Jurassic, there were flying dinosaurs that, effectively, used the same sort of propulsion system used by modern bats.  From Science Magazine:


A number of tiny, bat-winged dinosaurs flew the Jurassic skies, according to the strongest evidence yet for such creatures—a well-preserved fossil of a starling-size fluffball that may have looked a little like a flying squirrel. The find, recovered near a farming village in northeastern China, suggests dinosaurs were experimenting with several methods of flight during this period, but many were an evolutionary dead end.

“This fossil seals the deal—there really were bat-winged dinosaurs,” says Stephen Brusatte, a paleontologist at the University of Edinburgh who was not involved with the study.

Scientists were already confident that a number of dinosaurs could fly. There are birds, of course, which are technically dinosaurs and appeared during the Jurassic period, at least 150 million years ago. Other dinosaurs sported feathers on their hind- and forelimbs, effectively giving them four birdlike wings.

Evidently, most of these creatures were very small, some the size of a starling.  It seems that the idea of flight was much more common during this period than was originally thought.  Here is an artist's reconstruction. 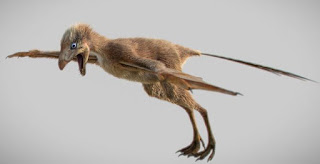 The more we discover, the stranger it gets.

Nature News is reporting on a jaw fragment that has been discovered on the Tibetan Plateau that is close to 160,000 years old. From the story:


The research marks the first time an ancient human has been identified solely through the analysis of proteins. With no usable DNA, scientists examined proteins in the specimen’s teeth, raising hopes that more fossils could be identified even when DNA is not preserved...

Until now, everything scientists have learnt about Denisovans has come from a handful of teeth and bone fragments from Denisova Cave in Russia’s Altai Mountains. DNA from these remains revealed that the Denisovans were a sister group to Neanderthals, both descending from a population that split away from modern humans about 550,00–765,000 years ago. And at Denisova Cave, the two groups seem to have met and interbred: a bone fragment described last year belonged an ancient-human hybrid individual who had a Denisovan father and Neanderthal mother.

One of the most important aspects of the study is that it opens the door to answering questions of other fossils through protein analysis:


Previous research identified Neanderthal remains using both proteins and DNA — but the success of the latest study could lead to a greater emphasis on getting ancient proteins out of fossils that haven’t yielded DNA, says Chris Stringer, a palaeoanthropologist at the Natural History Museum in London. The method could prove particularly useful for older samples or those from southeast Asia and other warm climates, where DNA degrades quickest.


“Well, the truth is the dinosaurs were extinct maybe … about 50 billion years ago [ed: Robertson misspoke here], and this planet has been [around] much longer than that,” Robertson asserted. “And there was a course that they were trying to hustle around called creation science that was just nonsense, and it was so embarrassing, so we wanted to make sure we told the truth.”

“You know, this universe that we live in is about 14 billion years old and there’s no question about it,” Robertson claimed. “And we have tremendous geological records and all the rest of it. And that 6,000-year stuff just doesn’t compute. But we, as Christians, we need to know the truth.”

Ham was quick to respond:


“It’s not those of us who take God at His word who are ’embarrassing’ — it’s the other way around!” he wrote on Friday. “Those like Pat Robertson who adopt man’s pagan religion, which includes elements like evolutionary geology based on naturalism (atheism), and add that to God’s word are destructive to the church. This compromise undermines the authority of the infallible word.”

Ham said that buying into the world’s Godless teaching is “a major reason why there’s been (and continues to be) an exodus from the church of the younger generations.”

I think that there are quite a few reasons why young people are falling away from the church. I, personally, think that the biggest reason is theodicy, which is an incredibly thorny issue.  It is hard to explain to kids why their prayers often go unanswered.  I am not remotely convinced that it is because people are being educated by “Godless teaching.”

Robertson is correct that the evidence overwhelmingly supports a universe that is almost 14 billion years old.  It is is also quite true that the people who reject this position do so for religious reasons.

One of the characteristics of the home school curriculum that my youngest daughter has is that she uses Bob Jones University science textbooks.  You have to read these things to believe them.  Her most recent subject was glacier formation.  The information about that was pretty straightforward but then it delved into the differences between the standard geological column view and the creationist (referred to in the book as creationary) view.

In the geological column, there is evidence of at least twenty major glaciations dating back hundreds of millions of years, culminating in the cryogenean period of the Pre-Cambrian.  The creationary view wants to compress all of these into a single glaciation between 700 and 1300 A.D.

While it is quite true that there was a “mini” ice age around 1100 A.D., it is categorically nothing like that recorded in the geological record.  The last big glaciation, the Younger Dryas, is recorded as having happened some 13 thousand years ago and its cause is still unknown.

Reading the young-earth arguments, one gets the impression that the author is struggling to fit the known evidence into a model that is just untenable.  It is like reading The Genesis Flood by Morris and Whitcomb, with all of the “must have,” “could have,” and “probably” phrases.The notion that this model must be right because “the Bible says so” permeates the text.  Unless students go to conservative Christian colleges which teach the same thing, they are going to encounter standard geologic and astronomic information in their courses.  Telling people that “the Bible says so” when their eyeballs tell them otherwise is not a good strategy for winning the souls and minds of the millenial generation.
Posted by Jimpithecus at 5/06/2019 10:43:00 PM No comments: