Did the LCA Have Teeth More Like a Gorilla?

Artificial intelligence is playing a role in understanding human evolution.  From the Australian site News.com comes a story about new work in trying to understand what the last common ancestor to apes and humans might have looked like:


IT’S an image imprinted on our brains: the steady march of evolution from chimp to human. But it’s not quite right.

Monkeys don’t belong on the tree. They have tails.

Chimps, which don’t, are with Bonobos our closest living relatives. And, as such, both should be standing alongside us in the march of life.

Stretching out behind should be a gradually converging branch of earlier variations.

Ultimately, between six and eight million years ago, the branches almost certainly converge on one common ancestor.

We know almost nothing about what that was.

We have reasonably secure evidence of bipedality at around 6 million years in the form of Orrorin tugenensis from Kenya, as well as a crushed skull from Chad called Sahelanthropus that may or may not be 7 million years old, and recently, fossil footprints, purporting to show bipedal walking, from Crete have been uncovered that have been dated to around 5.7 million years ago.  Beyond that, nothing.  That is where the new AI study comes in.


The researchers used machine learning to teach an artificial intelligence to identify and classify fossilised hominid teeth dating from 25 million years ago. It then sifted through these to find patterns of development.

The study published in the science journal PaleoBios found one tantalising tip.

Now, it’s not a lot. And it certainly doesn’t say our ancestor was a gorilla.

But what it does do is add some shape and substance to this nebulous period of our human origins.

The information that is contained in the article is not nearly as cut and dried as is indicated by the news story. From the conclusion:


Given that the divergence of humans and chimpanzees occurred in the late Miocene, and that Miocene apes are much more similar to Gorilla in dental proportions, we assert that gorillas are the more appropriate extant model for the African ape LCA in terms of the relative sizes of the postcanine teeth. This similarity in dental proportions likely has implications for the interpretation of dietary adaptation and possibly phylogenetic relationships in Miocene apes, including the chimpanzee-human last common ancestor.

What this likely means is that, during the Miocene, which was the golden age of the apes, even after the divergence of Gorillas from the main line, there were extant forms that continued to have varying degrees of traits that could be associated with gorillas, presenting a classic case of collateral ancestry.  It is possible that one of the lines eventually led to chimpanzees, while another led to us.  We won't know more until we actually have some fossil remains from that missing time period.
.
Posted by Jimpithecus at 9/22/2018 01:53:00 PM No comments:

A story in CNN (linked from elsewhere) reports that the world's oldest fossil has now been dated.  Rob Picheta writes:


The oldest known animal in the geological record has been identified, in a discovery that scientists are calling "the Holy Grail of palaeontology."

Fat molecules discovered on the fossil of a mysterious creature called Dickinsonia have confirmed that that it lived 558 million years ago, making it the earliest known member of the animal kingdom.

The findings place its existence 20 million years before the Cambrian Explosion event, when major animals began appearing on the fossil record.

The fossil was first discovered by Australian scientists on a remote Russian cliff face by the White Sea in 1947 and the study, published Friday, brings to an end a decades-long debate to identify what it was.

Here is an uncredited photo of the animal: 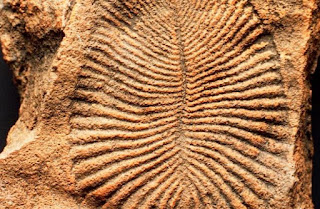 How do we know it had "fat" molecules? Apparently, it was so well preserved that it had traces of cholesterol.


"Scientists have been fighting for more than 75 years over what Dickinsonia and other bizarre fossils of the Ediacaran Biota were: giant single-celled amoeba, lichen, failed experiments of evolution or the earliest animals on Earth," Brocks said.
"The fossil fat now confirms Dickinsonia as the oldest known animal fossil."

Another piece of the puzzle.

If you have been following the trials and tribulations of Kent Hovind, you will know that he was once known as "Dr. Dino" and has been a staunch young earth creationist for some time.  He also kind of represents the wild wild west of creationism.  For starters, he has been roundly criticised for his academic credentials, which are somewhat more than suspect.  Prominently known for his Hovind Challenge,  he also came to the attention of the IRS, who charged him first with tax evasion and then for structuring, once he was already in jail.

Peter J. Reilly has been following the career of Kent Hovind for some time as it pertains to his tax evasion. Hovind wound up spending eight years in prison for tax evasion and almost had his sentence increased for the subsequent structuring.

Reilly's most recent column is, however, a cautionary tale involving Hovind's second ex-wife, Mary Tocco.  Through a lengthy interview, she shares her initial thoughts and then consequent misgivings about how Hovind was running his business.  The account is well worth reading, if nothing else to see how a good person can become derailed by a charlatan.  Reilly writes:


Ms. Tocco having a lot more at stake than I did looked pretty intensely into the structure that was designed to keep the man who didn't think he did anything wrong the first couple of times from getting in trouble again. And more importantly not having his second wife sucked into the vortex as his first wife was.

You don't need a palantir to see how the story ends but it reveals much about the conspiracy-theory-minded Hovind and how far off the rails he has gone.
Posted by Jimpithecus at 9/19/2018 09:48:00 PM No comments:

Suzanne Sadedin: Is There A Place For Evolution In Intelligent Design?

Suzanne Sadedin, writing for Forbes, wonders if there is room for evolution in the Intelligent Design Movement.  This article came out almost a month ago but I have been so swamped (as well as recovering from hernia surgery) that I missed it.  She writes:


Intelligent design and evolution don’t have to be opposed. Most versions of intelligent design (other than some kinds of Young Earth Creationism) these days acknowledge some evolution, at least within species. So clearly intelligent design can include evolution. Many people are content to believe in some sort of intelligent, powerful but largely hands-off creator, who might have given evolution a nudge here and there. There’s no way anyone can prove them wrong (though I think there are good reasons not to share their beliefs).

This last point is very, very important. Most scientists that I know don't factor in religious belief or the existence of a creator into their hypothetical models because there is no way to test for them. I know quite a few who practice science on a daily basis (chemical engineerings, physicists, biologists, to name a few) who are Bible-believing Christians but who largely practice science in a methodologically naturalistic way. Underlying this practice is a general sense that the created universe has an order and rules that it follows.

My daughter, the other day, told me that before Isaac Newton discovered gravity, people could fly. It was, of course, a joke but it reminded me that gravity, as a force, effectively holds the universe together and if it were to suddenly not work the way we think it does, it would be catastrophic for all life. Cars are designed (well or badly) so that they will hold the road against the pull of gravity. When the testing of them occurs, it doesn't occur to the designers that the pull of gravity will change because it never has. Nowhere in their calculations is the thought that God might “lift the car off the ground and fly it through the air.” Why? Because that has never been observed.

This overall perspective hearkens back to Darwin's original position: whether or not a creator exists, in everyday scientific explanations of how things work, invoking a creator is not necessary.  Things can be explained without reference to William Paley.  It doesn't mean there isn't a God.  I happen to believe that there is.  What it does mean is that it is of no value to factor my belief into my hypotheses about how things work in the world.  If God oversees the whole process, then everything that happens is in keeping with His plan, anyway, evolution included.
Posted by Jimpithecus at 9/18/2018 08:45:00 PM No comments:

Okay, time to get back in the saddle.  The Arizona Republic is running a story out of Arizona that is very disconcerting:


Here is a bit of instruction from a guy Superintendent Diane Douglas tapped to help review Arizona’s standards on how to teach evolution in science class: The earth is just 6,000 years old and dinosaurs were present on Noah’s Ark. But only the young ones. The adult ones were too big to fit, don’t you know.

"Plenty of space on the Ark for dinosaurs – no problem," Joseph Kezele explained to Phoenix New Times' Joseph Flaherty.

From the Phoenix New Times story:


Kezele teaches biology at Arizona Christian University in Phoenix. He advocates teaching his version of "established, real science" in classrooms.

Evolution, he said, is a false explanation for life and should be taught so that students "can defend against it, if they want to."

"I'm not saying to put the Bible into the classroom, although the real science will confirm the Bible," Kezele told Phoenix New Times in an interview on Wednesday. "Students can draw their own conclusions when they see what the real science actually shows."

He argued that scientific evidence supports his creationist ideas, including the claims that the Earth is only 6,000 years old and that dinosaurs were on board Noah's Ark.

ADE spokesperson Stefan Swiat said that Kezele was selected because of his position at Arizona Christian University. Swiat was unaware if Douglas knew that Kezele was a creationist when she selected him.

It is good bet that Diane Douglas knew exactly what Kezele thinks about evolution. If not, then she is extremely derelict in her job, managing to overlook a critical area of science education. She has expressed a desire that both creationism and evolution should be taught.   Depending on how this is handled, however, there are two sides to this.  One is that evolution will be taught but that the teaching of it will be severely hampered by the Arizona school board.  The other possibility is that it will provide science teachers with an opportunity to show evolution's strengths and creationism's weaknesses.  Not sure how this one is going to turn out.
Posted by Jimpithecus at 9/17/2018 09:28:00 PM No comments: