More Trouble For the “Ark-n-Park”

The financial troubles continue for the Creation Museum's Noah's Ark display, or as Barry Lynn affectionately calls it, the “Ark-n-Park.” Yes, I used the possessive because AiG is up to their eyeballs in the project. Liz Goodwin, of Yahoo, writes:

When you walk into the Creation Museum, one of the first things you see is an exhibit of a doe-eyed human child crouched next to a velociraptor dinosaur. The two seem not at all surprised that their epochs have collided. Homo sapiens and velociraptors missed each other by a good 65 million years, according to most scientists, but in the world of the Creation Museum, humans and dinosaurs were created on the same day 6,000 years ago, coexisting peacefully in the Garden of Eden. A thousand years later, a 600-year-old man ushered them onto Noah's ark.

Velociraptors, huh? You mean these things? The ones with retractable claws and sharp teeth? The best killing machines in the dinosaur world? 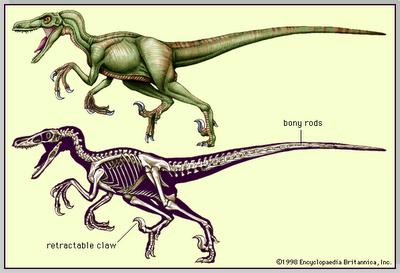 The group initially announced that it expected to break ground on the park in 2011, before eventually pushing that date back to 2014. But in June, in an interview in the Creation Museum's “Noah's Cafe,” Ark Encounter vice president Michael Zovath told Yahoo News that the group no longer has a date in mind for the construction to begin. It has been unable to raise sufficient amounts of money, despite pleas to the Creation Museum's visitors to donate to the project.

“Fundraising is really tough,” Zovath said, blaming the recession. “It's not moving so fast as we hoped.” The private LLC that is building the park would need to raise another $20 million before it can break ground, he said. So far, it's taken in $5.6 million in donations and $17 million in private investments.

To add to the bad news, the Creation Museum is having its lowest attendance year yet. Last fiscal year, 280,000 people visited, compared to 404,000 the first year it opened in 2007. Zovath thinks that potential visitors have been less willing to travel to the museum because of the poor economy.

Yah, well, that is probably true. The economy has had that kind of effect on a lot of businesses. I suspect that the project will eventually be built. After all, as Murphy once said:“No one can kill a bad idea.” She ends with:

Sometimes, the museum tackles evolution and its huge disagreement with science head-on, through exhibits on Charles Darwin and the Grand Canyon. At other times, certain displays seemed to entirely ignore the scientific consensus on an issue. A show on finches, a small type of bird that helped Darwin first hypothesize that one species of animal could turn into many different species, doesn't mention their key role in his scientific discovery. "Scientists are puzzled how so many finch species could arise, displaying such a vast array of traits," the exhibit reads. "The Bible provides the explanation. In the beginning of time, six thousand years ago, God created every kind of bird, including the finch kind, and He gave them the ability to 'multiply upon the earth.'"

No, actually, they aren't puzzled
at
all.
This is the kind of thing that makes me a very hateful person. Darwin's explanation for why the finches were different has been around for 150 years. But aside from the fact that Darwin used the finches because it was a good illustration of selection in different environments, the above statement is nothing short of a lie. A lie written with a straight face and behind which there is no compunction to tell the truth. It is this moral turpitude that allows them to say that there are no transitional fossils as well.