Science Magazine (and quite a few other outlets) is running a story involving the discovery of a 500, 000 year-old mollusk that shows some rudimentary carving.  Michael Balter writes:


In 2007, Stephen Munro got the shock of his life. The archaeology graduate student was studying mollusk shells gathered more than 100 years ago on the Indonesian island of Java, where an early human ancestor, Homo erectus, had roamed at least 1 million years ago. As he studied photographs of the shells, Munro spotted one apparently engraved with a pattern of zigzag lines. “I almost fell off my chair,” he says. That’s because the oldest known engravings date back 100,000 years and were made by modern humans—the only species thought to be capable of making abstract designs.

If this has been accurately interpreted, this suggests that Homo erectus was capable of considerably more cognition than is generally ascribed to this form. While there is evidence that Homo erectus controlled fire and, perhaps, had hafted tools, there has been, as of this point, no evidence of symbolic thought.

Some are not convinced:


Yet even if ancient humans engraved the shell, says Russell Ciochon, a paleoanthropologist at the University of Iowa in Iowa City, the team has not shown that H. erectus did it. Ciochon, who has spent many years working at sites in Java, agrees with criticisms that the shells have been taken out of context, because Trinil was not an occupation site where early humans actually lived. Rather, Ciochon argues, the human fossils found there (which include a skullcap widely agreed to be H. erectus and a thigh bone that could belong to either H. erectus or H. sapiens, a matter of sharp debate) were washed into the site by a powerful flood, and nothing found with them—including the shells—can be assumed to have been associated with them originally.

Here is the shell. 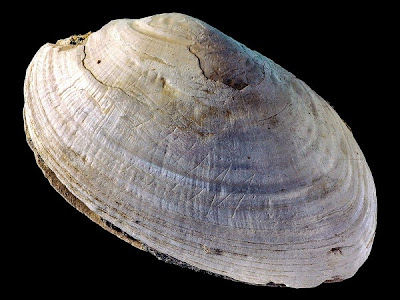